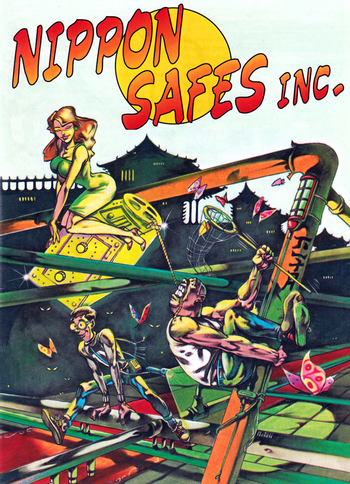 Nippon Safes Inc. is an Adventure Game in the vein of LucasArts classics made by an Italian company named Dynabyte in 1992 and released for MS-DOS and Amiga. It stars three characters (computer geek-turned-thief Doug Nuts, sexy starlet Donna Fatale and former boxer Dino Fagioli) who ended up in the prison of the fictional Japanese city of Tyoko and were bailed out by a mysterious benefactor, who however needs them to recover three artifacts for him.
Advertisement:

The interesting thing is, those three people not only do not work together, but they don't even know each other: the player can choose with whom begin the adventure and every one of them will meet the others at one point or another, with the player being able to see the story from three different perspectives. This system (that actually predated Day of the Tentacle by a couple years) was called "Parallaction" by the creators, which is also the name of the game engine.

Nippon Safes Inc. gained some recognition in gaming circles at the time and was praised for its zany humour, good graphics and the novelty of Parallaction, with complaints directed to the poor quality of the English translation and a few bugs and obscure puzzles. It received a sequel three years later with The Big Red Adventure, starring the same characters but this time set in a parody of contemporary Russia after the fall of Communism and Soviet Union.

As of March 2021 the game has been officially declared freeware

: both game and manual are available on the "Games" page

The games provide examples of the following tropes: