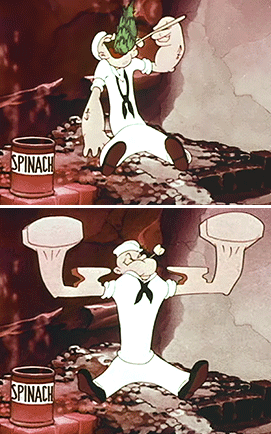 "That's all I can stands, and I can't stands no more!"
"SARDINE! You want to know the secret to my power? It's the sardines. Eat them, and you will grow stronger as well."
— Valvatorez, Disgaea 4: A Promise Unforgotten
Advertisement:

Quite simply, this is a foodstuff Power Source that bestows some benefit when eaten. The powers may be temporary or permanent, the food might work only for one specific character, it may even be just a placebo, but the result is the same — ingesting it gives the eater positive results, often granting super powers or turning him into a badass.

Differs from Super Serum and various types of magical potions in that the Power-Up Food does not seem rare, unusual, or hard to produce. As a general rule of thumb, a Power-Up Food should not look out of place if it appears at a grocery store. This power up is often the solution to whatever problem the character is having.

A very popular Power-Up item in Video Games. Many times, the Power-Up Food is also the Trademark Favorite Food for the character, for obvious reasons.

When eating food only restores health (but does not grant any other new abilities), the trope is Hyperactive Metabolism.

When this trope is used to sell Real Life food products, then the trope is Cereal-Induced Superpowers. Also see Bottled Heroic Resolve and Transformation Trinket. May invoke Addiction-Powered if abused.