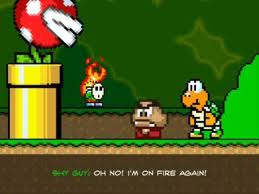 Jeff, Hal, Steve, and a Shy Guy ON FIRE!
Jeff: What does Mario even want with us? Doesn’t he have enough of those damned coins?
Hal: Well, it’s not like we stole the princess or anything.
[beat]
Hal: Oh yeah...that’s right.
— Episode 1
Advertisement:

A discontinued/finished flash animation series on Newgrounds by araskin500 and pthouse about a Goomba named Jeff and a Koopa Troopa named Hal, and other characters working for Bowser.

Most of the humor comes from lampshade hanging conventions of the Mario world, running gags, swearing, and Hal's Butt-Monkey status. The series, as well as a few other works, can be found here

The series ended with "Bowser's Kingdom: The Movie". An Extra-Long Episode that deals with Jeff and Hal getting their biggest assignment from Bowser yet.

There is a series related to this one called Smash Kingdom. Some of the characters make an appearance there. Now with a Characters page.