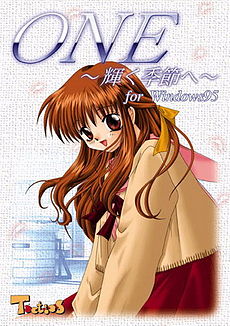 I was so happy then...
Advertisement:

ONE ~To the Radiant Season~ (or One: Kagayaku Kisetsu e) is a 1998 visual novel, by Tactics, a branch of the Visual Arts company Nexton. The makers of ONE ~To the Radiant Season~ would later form Key/Visual Arts and make Kanon; they would, however, take a lot of inspiration from ONE, especially character design. Take a look at the picture and then look at Ayu from Kanon.

ONE tells the story of Kouhei Orihara, a Japanese high school student who suddenly finds his ordinary, everyday life pushed to the brink of collapse by the seemingly inexplorable expansion of an inner reality which threatens to replace his own. In the long and cold winter before the Radiant Season, he will encounter new friends, rediscover old promises, witness ties forged and broken, and learn of the things which everyone must leave behind.

Kouhei suspects that at some point his current life will change while living a peaceful daily routine. His parents died when he was very young, and after his younger sister dies, he begins to seclude himself in the Eternal World, a world within his mind. The game's recurring theme is a focus on the Eternal World, an alternate space that Kouhei created out of his want for a place in which nothing ever changes. He starts receding into this world about a week before disappearing, during which every one (including the girl he loves) forgets about him, and he falls into the Eternal World completely, making it seem as if he never existed in the real world. His only hope of returning is to form a strong bond with someone prior to leaving, and to follow his guide back to the real world.

The characters from ONE also appear as playable characters in the fighting game Eternal Fighter Zero by Twilight Frontier. EFZ is notorious for featuring Unknown (a younger, mirrored version of Nagamori) as a powerful Sub-Boss, who was toned down for her playable version, as well as creating Doppel Nanase (A Nanase clone) as an Original Generation.

The game One Kagayaku Kisetsu E provides examples of: