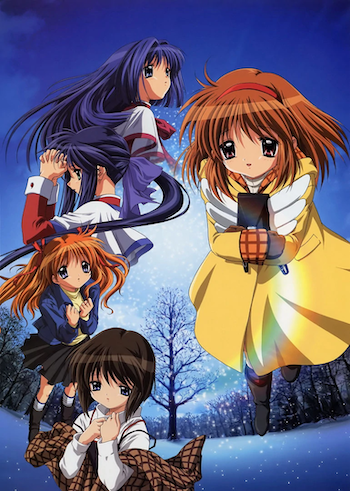 The epitome of Snow Means Love.
"Do you know the title of this song? It's Canon. Pachelbel's Canon. It repeats the same melody and crescendos gradually, peacefully, and beautifully. It would be nice if life changed like that: slowly but surely, while being seemingly unchanged from day to day."
— Sayuri
Advertisement:

Ordinary High-School Student Yūichi Aizawa used to visit his aunt Akiko Minase and cousin Nayuki Minase in their quiet little town every holiday, but one year something happened and he left for seven years. When he transfers to Nayuki's high school, his memories of that time remain a blur.

Upon his return he encounters a number of mysterious girls from his past who all need his help. Bokukko taiyaki-thief Ayu Tsukimiya searches for a precious lost item she cannot describe. Quiet and serious Mai Kawasumi hunts demons in the school after dark. The childish tsundere Makoto Sawatari suffers from amnesia and has no place to go. The Delicate and Sickly Shiori Misaka is estranged from her sister and never present at school. Finally, there's the lonely Nayuki, weighed down by rejection and tragedy.

Yūichi resolves to help them, but as he gets involved, he discovers that there is far more to the girls than meets the eye. Mystical happenings lie hidden in this strange town, tied to Yūichi's forgotten past. In dealing with the girls, Yūichi must face his lost memories. What happened seven years ago, and why can't he remember?

This is the story of Kanon, a well-known eroge by Key/Visual Arts with a clean version. The original Visual Novel was first released in 1999, with the clean version following in 2000. Despite its Multiple Demographic Appeal to girls, it's actually a seinen series. It has several adaptations; there are two anime adaptations (the 2002 Toei Animation one and the 2006 Kyoto Animation one), CD dramas, a manga, a series of light novels, an Alternate Continuity manga called Kanon Another Story: Wonder Three, and a non-canonical gag manga crossing over with AIR. The original game was never released outside of Japan, but a completed English translation patch presently exists courtesy of Non-Directional Translations.

Several characters also appear as playables in the doujin Fighting Game Eternal Fighter Zero by Twilight Frontier. Kanon is notorious for having the most representatives in that game (Ten in total: The heroines Ayu, Nayuki [who has two forms, asleep and awake], Makoto, Shori and Mai; as well as Sayuri, Mishio, Kaori and Akiko). Ayu and Akiko would also appear as playable characters in Glove On Fight, another doujin Fighting Game by Watanabe Seisakujo, later known as Franch Bread (Of Melty Blood fame), with Super-Deformed, Ax-Crazy characters who specialize in boxing.

Absolutely not to be confused with this Kanon, a shoujo manga by Chiho Saito, or K-On!. Or the trope Canon.

Kanon Another Story: Wonder Three provides examples of:
Promise me?