Here are the main and secondary characters who appear in the Kanon Anime and Visual Novel. 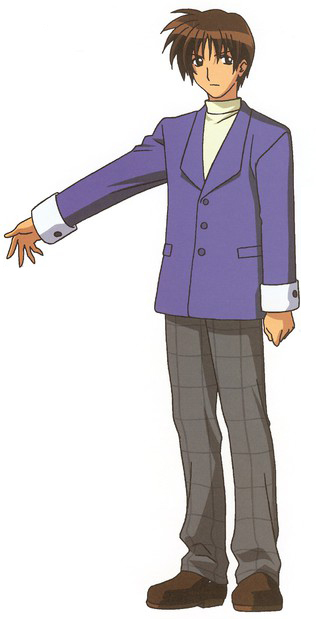 "They're called miracles because they do happen, even when things seem hopeless."

The protagonist. At the beginning of the story, he has just returned to the town where he used to spend his vacations as a kid for the first time in seven years in order to stay with his aunt, Akiko, while his parents are out of the country. However, he has practically no memory of the time he spent there all those years ago. As time goes by, he gradually learns why that is, but he may have been better off not knowing. Little does he know that he has a long, painful journey ahead of him...

A cheerful girl well-known both within and outside the story for her Verbal Tic and for her bordering-on-unreasonable love of taiyaki, Yūichi meets her early on after she collides with him head first. They quickly become good friends, and this quickly becomes a running joke (though it's later toned down to her simply glomping him). She is very short and behaves rather childishly, in spite of being the same age as Yūichi. She is looking for something important to her, but she can't remember what it is. She is the most prominent of the girls in the story and Yūichi's kanon (pardon the bad pun) love interest. 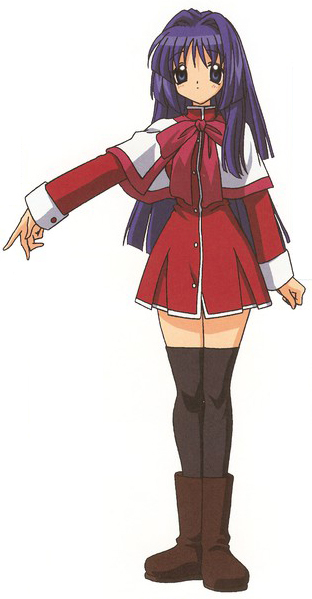 "Do you remember my name?"

Yūichi's cousin who sleeps under the same roof as him (as Yūichi is staying with his aunt and Nayuki's mother, Akiko). He remembers her vaguely from seven years ago. She has a fairly obvious crush on him, which he doesn't return. She also has a serious problem getting up in the morning, and is prone to falling asleep again repeatedly throughout the day. Loves anything with strawberries, especially strawberry sundaes, and can easily be bribed with them (which is useful for Yūichi). She is hardworking, upbeat and very athletic, being the captain of the school's track team because to her running ability, gained from years of having to run to school to be on time due to her sleep habits.

"They're called miracles because they don't happen."

A sickly girl that Yūichi and Ayu run into early on, and who is frequently seen hanging around outside the school during classes, apparently waiting for "someone important to her". She's quiet, peaceful and pretty pleasant and normal (though she does have a somewhat odd sense of humor and an odd fondness for eating ice cream in below-freezing weather, not to mention her almost complete terribleness at arcade games), other than being terminally ill, of course. She also has some troubles at home that are vaguely alluded to.

"Spring will come... I wish it was always spring."

Makoto is a mischievous, red-haired Tsundere who accosts Yūichi in the market the day after he arrives and claims to be holding a grudge against him. However, she doesn't remember why, and, in fact, she doesn't remember very much at all, not even her own name. She accepts Akiko's offer to live at her house until she remembers, becoming a Pretty Freeloader in the process. She also develops a fondness for pork buns and romance manga. All the while, she attempts to remember who she is, but it turns out she may have been better off not knowing. 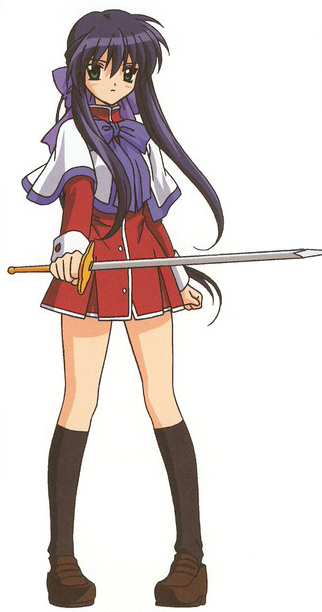 Mai is a calm, seemingly Emotionless Girl who comes to the school at night to fight demons. Because she has been seen there at night and because windows have been inexplicably broken, she is perceived as being responsible, and has been branded a delinquent by most of the students and the staff at the school. She is excellent with a sword, and she seems to know things about the strange goings-on around the town, giving Yūichi cryptic advice on several occasions. Her best friend (and possibly more) is Sayuri Kurata, and she aspires to be a veterinarian.

Akiko Minase is Nayuki's (nearly identical) mother and Yūichi's aunt, whom he is staying with while he's in town. She lets Makoto and, later, Ayu, stay there as long as they like and pretty much gives them free reign of the house. She also seems to have a pretty good idea what's going on even when Yūichi does not. She is a very kind and caring person, and is very maternal.

Mai's best friend (with whom she has a fair amount of Les Yay), Sayuri is a seemingly cheerful girl with an odd habit of referring to herself in the third person. Her family is rather wealthy, and she is a good cook. She and Mai have seemingly diametrically opposed personalities, which causes Yūichi to remark that "they sure do make an odd couple of girls". She is also referred to as being almost like Mai's older sister. Kind, friendly and gentle as she is, though, she has her own sorrows, and these are what drew her and Mai together.

Kaori Misaka is Nayuki's best friend and the object of Kitagawa's unrequited romantic interest (she mostly laughs at him, ignores him or makes him do heavy lifting for her). She seems to be fairly well-adjusted (if somewhat snarky and maybe a bit no-nonsense), but she has some fairly serious family issues that eventually come up. She's also the rep for Nayuki and Yūichi's class at school. She is sometimes seen staring wistfully out the window of the school.

The resident Butt-Monkey and chew toy at Yūichi's school, and a friend (of sorts) of Yūichi's. Also has an (unrequited) interest in Kaori, who mostly takes advantage of it to make him do things for her. Is a bit of a Jerk with a Heart of Gold, has a fondness for ridiculous clothes, as seen at the ball, and thinks he's a ladies man as well (he isn't).

An antisocial girl sometimes seen around the school. She provides Yūichi with exposition and comfort at the end of the Makoto arc.

The Jerkass Student Council President, who is apparently intent on expelling Mai (and possibly Sayuri as well, if she continues to associate herself with Mai) from the school.

Makoto Sawatari (The Real One)

Makoto is a young woman who befriended Yūichi when he previously stayed in the City of Snow. Yūichi once had a crush on her as he told a baby fox he was nursing back to health.

Tropes associated with the real Makoto: