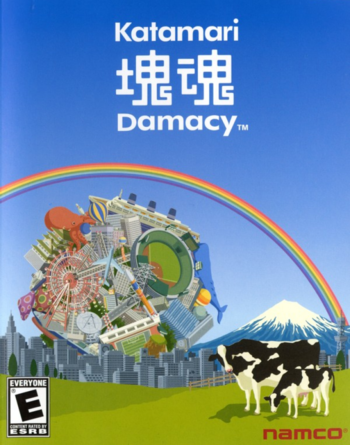 We are moved to tears by the size of the thing.
"My, Earth really is full of things."
Advertisement:

The King of All Cosmos gets drunk one night and accidentally destroys all the stars in the Great Cosmos. The following morning, he assigns his son, the Prince, to make new stars by collecting random objects from the Earth to be turned into stars. The Prince, who had been treated rather badly by his father up to now, does this by running the objects over with a big sticky ball that makes bigger and bigger clumps of objects as it collects them. The Prince starts by collecting ants and thumbtacks, and eventually moves on to whales, jumbo jets, office towers, and sports stadiums... and so begins the first Katamari Damacy.

One of the most well-known oddball video games, this item-collecting Puzzle Game franchise was created with one idea at the core: series creator Keita Takahashi wanted to bring silly, colorful, and simple fun back into gaming at a time when the industry trend was to be mature and serious. And the games certainly live up to this idea, the horrified screams of the countless people you're rolling up to eventually ignite into a star notwithstanding. It's great at a party, with recreational drugs being optional... and, really, they'd be redundant.

Advertisement:
Games in the Katamari series

In September of 2012, a short-lived Webcomic based on the series was launched on ShiftyLook, titled simply Katamari, which was later made available in a physical paperback collection. In 2018, a remaster of the first game, titled Katamari Damacy Reroll, was released on Nintendo Switch and Steam.