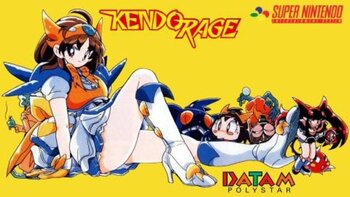 Kendo Rage is a 1993 Super Nintendo game by Datam Polystar (Japan) and Seta (U.S. localization). Its Japanese name is Makeruna! Makendou ("Do Not Lose! Kendo Magic").

The story depends on which version you play. In either, though, you end up playing as a magical girl who whacks all sorts of wacky monsters with her kendo staff. The gameplay is somewhat similar to that of the Valis series, but with a large serving of insanity.

The Japanese version continues its story with a one-episode OVA, an SNES/PlayStation fighting game, and an RPG for the PC-FX. Not surprisingly, none of them have been localized.