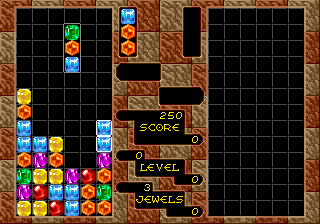 Screenshot of the Genesis version.
Advertisement:

Back in the time of the Classic Console War, Sega's answer to the mighty Tetris was 1989's Columns: the Ur-Example of the Match-Three Game.

In it, coloured gems come down from the top of the screen in columns of three: you cannot change their orientation, but you can shuffle the three gems around in their column. The objective is to line up gems in groups of three or more, either vertically, horizontally or diagonally.

Compare Puyo Puyo, which also has the player matching same-colored falling "blocks" and would later be acquired by Sega.