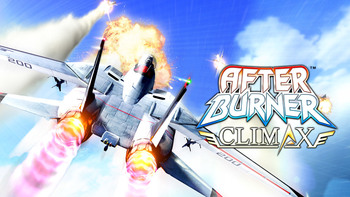 The most frantic flight simulator ever made.
Brave Fangs, Z is preparing the launch of a nuclear weapon. They'll be launch capable in 48 hours. Our mission is to prevent their launch. Jaguar Flight, alert 5. Good luck!
Advertisement:

A series of arcade Flight Simulation Games by Sega's AM2 division.

The games put you into the cockpit of an F-14 Tomcat (or one of two other possible planes in later games). You fly down at high speed destroying waves of enemies with your guns and missiles.

The arcade games are well known for their cabinets. Earlier games in the series can come in standard upright cabinets, but can also come in sit-down motion cabinets in which the seat moves around to correspond to your ship's motions. In the late 80's and early 90's, After Burner cabinets were quite the eye candy.

There's also a much lesser-known spinoff called G-LOC: Air Battle, in 1992. It is slower paced than After Burner and puts more emphasis on destroying enemies. Perhaps the only thing anyone remembers about it is that it had a special version designed for the R-360 cabinet, a motion cabinet capable of rolling upside-down.

The After Burner series contains examples of: