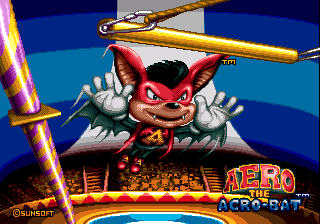 Aero the Acro-Bat is a 1993 Platform Game, created by Iguana Entertainment and published by Sunsoft (who adopted the character as mascot for a while). It was released on the Super Nintendo Entertainment System and Sega Genesis, and was later ported to the Game Boy Advance.

The title character is an acrobatic bat who works in a circus and has to defend it from an evil clown. The game was successful enough to get a 1994 sequel, Aero the Acro-Bat 2, and a 1994 Spin-Off focusing on one of the antagonists, Zero the Kamikaze Squirrel.

Tropes present in the Zero the Kamikaze Squirrel spin-off: