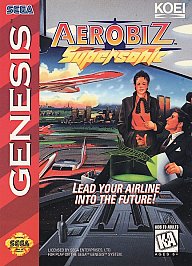 The sky is the limit.
Aerobiz was a Simulation Game made in 1992 by Koei, a company that is big on simulation games. The basic premise is you are starting a new international airline and you have to lead it to global dominance against three other competing airlines. The game provides a wide range of freedom and surprising level of depth and complexity for a 16-bit sim game with regards to business decisions and action as you expand from your home region across the world. The series was known as Air Management in Japan and there were three installments in the series:
Advertisement:

Each successive installment expanded gameplay by adding more aircraft, more cities and adding or refining features and interface. However, while the first installment is the most famous, the other two are nearly unheard of. As a player, you have control over routes flown, planes purchased, peripheral businesses bought, advertising, maintenance & service budgets, regional hub opening, and other business aspects. However, the game still subjects you to (mostly) historically accurate political and economic events (such as wars), natural disasters & weather effects, and random events (such as forced landings or crashes). For example, if playing as an airline in Moscow during any of the Cold War eras of play, the player would initially be restricted to buying only Soviet aircraft and be subject to major relations disadvantages in trying to open routes to Western cities.