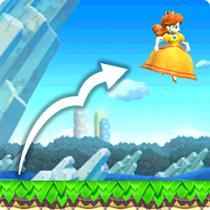 "All made possible by a little thruster in your bum."
"Jump, then jump again. Sure, it breaks the laws of physics, but so do most things I do."
— Spider-Man, Ultimate Spider-Man (2005)
Advertisement:

A weird example of video game Jump Physics, the Double Jump is the ability to jump while you're still airborne from the first jump, thus gaining additional height or distance. Exactly how this is supposed to work is unclear (what are they pushing off of?); games that justify it through Rocket Boots, Psychic Powers, Ki Manipulation, etc. are the rare exception. Even more rare are games that further justify why you can't repeat the action indefinitely to achieve Video Game Flight.

In most cases, the effect is similar to simply having one large jump, but it provides more versatility, especially for dodging attacks and obstacles, and gives the player a little more to do, as well as making a maximum-distance leap a bit more challenging to execute. Sometimes the second jump must be initiated at the apex of the first jump; other times the player can jump again while on the downward trajectory of the previous jump, which can often be used to avoid Falling Damage (even though the force required to perform that jump would be greater than the impact force from the fall). Some games have obstacles that can only be passed by jumping under them, then double-jumping to safety on the other side.

Trope Maker is Dragon Buster, a 1985 arcade game. Trope Codifier is arguably Metroid II: Return of Samus, which introduced to the series the infinite "space jump".

A staple of platform games, including metroidvanias, and fighting games. Frequently, the double jump is a Power-Up learned later in the game, alongside the Wall Jump. In a later generation of games, double jumps weren't considered cool enough any more, giving rise to characters with a triple jump. Indeed, this has led many games (especially later games) to have double jumping as just standard issue, with no reason or logic; for these games, it's just how jumping works.

Visually speaking, if there is a visual effect at all, chances are it will be a "ripples on water" effect.