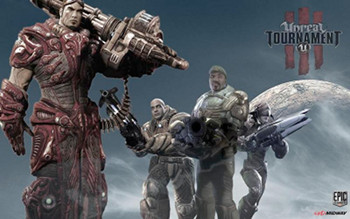 You are on Red!
"In 2291, in an attempt to control violence among deep space miners, the Liandri Mining Corporation established a series of leagues and bloody public exhibitions. For fifty years the fights' popularity grew with their brutality. Then... the war came."
— Trailer of the game
Advertisement:

Unreal Tournament III is the latest installment in the Unreal series. It was made by Epic Games, and was released for PC and PlayStation 3 in 2007, followed by the Xbox 360 in 2008.

The game was an attempt to introduce some serious changes and additions to the gameplay, trying to reunite the already Broken Base of both Unreal Tournament and Unreal Tournament 2004, another major graphics update, and new maps. The amount of gametypes was also trimmed, with only six gametypes available on launch (Deathmatch, Team Deathmatch, Capture the Flag, Vehicle CTF, Warfarenote A combinaton of Onslaught and Assault which takes the gameplay of the former and adds side objectives for advantages and an orb for quick node capture. and Duel). The Black Edition added two more gametypes to the mix: Betrayal and Greed.

The single-player campaign has an actual plot! It's also the first Unreal Tournament game where you don't actually compete in the Tournament. Instead, you play as Reaper, the leader of the Ronin team, who were rescued and hired by the Izanagi corporation after the Krall invasion of the Twin Souls colony, while the three corporations face against each other for controlling different worlds, and at the same time fight against the Necris race, who wants to infest and assimilate all the worlds they can. The team was put under the command of Malcolm, a former Tournament champion and the series' face.

Its real lastability lies in the almost limitless potential for modding, though, but the single-player campaign is a fun ride in itself, and multiplayer... oh boy, the multiplayer.

It should also be noted that, like previous installments of the UT franchise, this one's Game Engine has been very popular amongst developers and their games, being by far the most popular of the series so far - as of 2020, over four hundred games have been built with Unreal Engine 3, compared to about 20 for the original engine and 60 for UE2. Batman: Arkham Asylum, the Mass Effect franchise, Mirror's Edge, sibling Epic franchise Gears of War, Mortal Kombat vs. DC Universe, the Medal of Honor franchise, Rainbow Six: Vegas, the 2009 Star Trek preboot's tie-in ("Star Trek DAC"), and even Infinity Blade for iOS are just a few of the titles which utilize this game's underpinnings.

Bear in mind that tropes which also apply to past games may apply here as well.