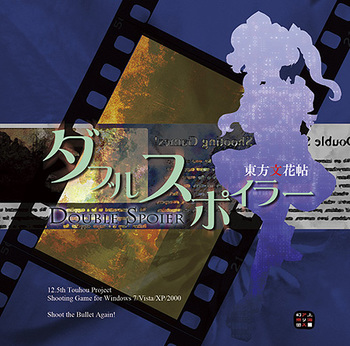 Double Spoiler ~ Touhou Bunkachou is a video game created by Team Shanghai Alice for Windows computers in 2010. It's the 12.5th videogame installment in the Touhou Project franchise, and a sequel to Touhou Bunkachou ~ Shoot the Bullet.

Aya Shameimaru travels Gensokyo with her camera once again, searching for material to include in her newspaper, the Bunbunmaru. But this time another tengu, Hatate Himekaidou, has descended from Youkai Mountain, trying to figure out what an old bat like Aya has that her own "Kakashi Spirit News" is missing.

The game feels like an expansion pack to the previous "danmaku photography game", since it features similar gameplay but draws on bosses from newer games in the series. For followups, see Danmaku Amanojaku ~ Impossible Spell Card and Hifuu Nightmare Diary ~ Violet Detector.

Has nothing to do with Spoiler Tropes or putting two aerodynamic spoilers onto one's car.