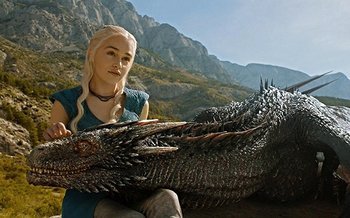 A pairing that will set your heart aflame… along with the rest of you.
"You already have a pet. He's an Arco-flagellant combat cyborg. He's seven feet tall, and eats 30 pounds of raw flesh a day. You named him 'Skippy'."
— Eastwood,

A character keeps as a pet what would normally be considered (and the same species may be in every other instance) a bloodthirsty monster. Such a creature may be given a deceptive name. A person with such a pet may be a Fluffy Tamer, if not The Beast Master. May be a Team Pet.

See also Mons and Unusual Pets for Unusual People. Compare Monster Roommate and Monster Allies. When the monster is much more human-like, see Supporting the Monster Loved One.