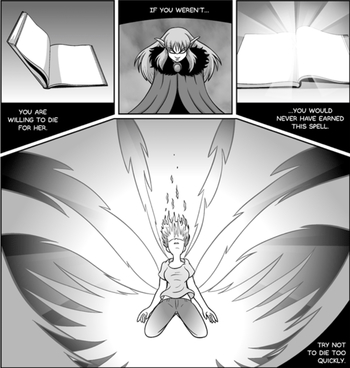 "The Morituri metabolism is fundamentally incompatible with the human—and Woody's body rejected it catastrophically, as any body must. Just as it's impossible to predict what powers a person will develop, it's impossible to say just when this rejection will occur. One can't expect a greater span than a year."
— Dr. Kimo Tuolema, Strikeforce: Morituri

The human version of Explosive Overclocking. A hero, often one who is already able to transform into a super-charged mode, discovers, is granted, or reveals that he is capable of a further transformation which gives him unstoppable power.

This transformation comes at great cost, though, as, once he uses it, it's only a matter of time before he dies, explodes, goes insane, becomes a mindless super-powered beast, or ascends to a higher plane of existence. Even if it doesn't kill him, he still may have to use his own life force to attack.

When forced to pull it out, the hero's friends will often try to talk him down, if uses it anyway it might result in a Heroic Sacrifice.

Often, the extreme bodily stress will be demonstrated by the character being in incredible pain during the transformation.

Sub trope of Super Mode. Compare Heroic RRoD, My Skull Runneth Over, Phlebotinum Overload, Going to Give It More Energy, Dangerous Forbidden Technique and Power-Upgrading Deformation, which has ugliness as the tradeoff.

Mari deactivates Unit-02's restrictors, transforming the Eva into a monster and putting her life in danger to get an edge.

Mari deactivates Unit-02's restrictors, transforming the Eva into a monster and putting her life in danger to get an edge.