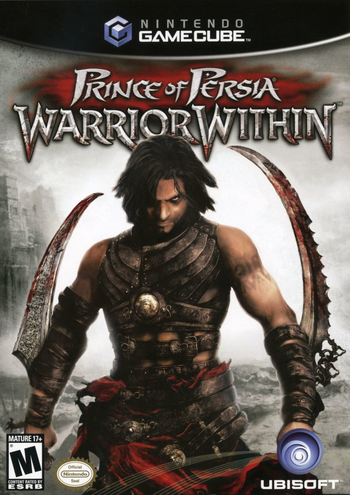 "I am... the architect of my own destruction."
—The Prince
Advertisement:

Prince of Persia: Warrior Within is the 2004 follow-up to Prince of Persia: The Sands of Time, which Ubisoft hoped would be more financially successful by giving the sequel one of the most amusing Darker and Edgier twists in history. The storybook "Arabian Nights" feel of the first game was replaced by sexual content (including several stripperific female characters, one of which is introduced via a five second focus on her metal thong), graphic violence (the loading screen is a waterfall of blood), language, and heavy metal music by Godsmack.

While the gameplay was refined and improved (especially the combat), the Prince himself was reduced to an arrogant thug instead of the more cheerful character of the first game. Seven years after the events of the previous game, the Prince is being hunted by an unstoppable beast, the Dahaka. The creature is apparently a guardian of the timeline and wants to ensure that the Prince dies for releasing the Sands of Time, despite the Prince having used the Sands to prevent himself from having released them in the first place. In a desperate effort to avoid this fate at the hands of the Dahaka, he travels to the island where the Sands of Time were originally formed, hoping to prevent their creation.