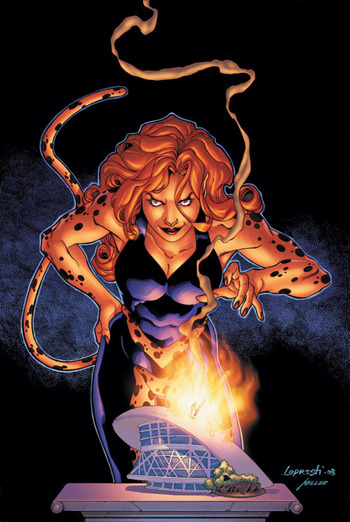 Barbara Ann Minerva as the Cheetah as seen on the cover of Wonder Woman (vol. 3) #28. Art by Aaron Lopresti
Advertisement:

Cheetah is a Legacy Character from DC Comics, and is Wonder Woman's Arch-Enemynote  There are others such as Ares and Circe but they haven't been able to achieve the popularity that Cheetah has. in the Wonder Woman comics. There have been four people who have taken up the mantle of Cheetah, and the first version, Priscilla Rich, a wealthy but troubled socialite with a Split Personality who donned a cheetah costume and fought the Golden Age Wonder Woman (who was Hippolyta in some continuities), was created by Wonder Woman's creator William Moulton Marston, and first appeared in Wonder Woman #6 (Volume 1) in 1943.

Since then, Cheetah, in all her various identities, has been a long time nemesis for Wonder Woman, with the Barbara Ann Minerva version of the character being the most well known to the mainstream, and has appeared across various media relating to Wonder Woman, including the DC Animated Universe and the direct to DVD original movies Wonder Woman (2009) (where she has a brief cameo at the end), and Justice League: Doom (2012), where the Barbara Ann Minerva incarnation has a major role.

Due to the fact that Cheetah is a Legacy Character, and there have been at least four versions of the character, each version will have their tropes in a separate folder.

The Barbara Minerva version of the character made her film debut in 2020's Wonder Woman 1984 where she's played by Kristen Wiig.

open/close all folders
Cheetah I
Cheetah I
AKA: Priscilla Rich “Out of my way, Amazon! Or Cheetah will send you back where you came from — in a box of Crackerjacks!”

A wealthy, but troubled socialite with a Split Personality, Priscilla Rich donned a form fitting Cheetah costume to become a frequent foe of the Golden Age Wonder Woman. She eventually retired from supervillainy, and let go of her grudge against Wonder Woman. She was killed by Barbara Minerva in her old age, as the latter sought to make herself the only Cheetah. 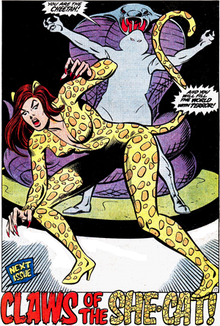 “Now that you’ve invaded the territory of the Cheetah… you won’t be permitted to leave alive!”

The niece of Priscilla Rich, the Golden Age Cheetah, Deborah Domaine was kidnapped by the supervillain Kobra, and brainwashed into becoming the second Cheetah. Driven insane, and equipped with a more lethal version of her aunt's costume, Deborah proved to be a formidable foe of the Silver Age and Bronze Age Wonder Woman, Diana Prince. She was retconned out of existence following the Crisis on Infinite Earths. 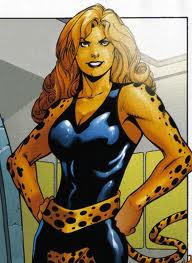 "This sort of thing doesn't happen to Barbara Minerva. I don't let it."

Barbara Minerva was an archeologist who ran across an ancient ritual that gave her power, speed and immortality as the Cheetah, an avatar of Urtzkartaga's will. This had a price—because she was not a virgin as the god Urtzkartaga required, her body was frail and painful when not in Cheetah form. Her interest in rare artifacts caused her to clash with Diana when she tried to steal the magic lasso... the rest is history. 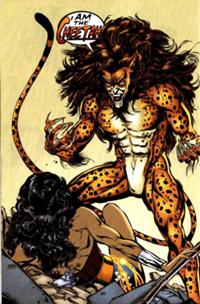 Sebastian Ballesteros was a corporate raider who learned early on that true power inevitably trumps riches. Making a deal with Urtzkartaga, he had the powers of the Cheetah transferred from Barbara Minerva to himself. He later cut a deal with Circe, and had one of Diana's closest friends transformed into the third Silver Swan. Easily overpowering Minerva when she tried to regain the Cheetah powers from him, he was eventually killed by her while in human form. 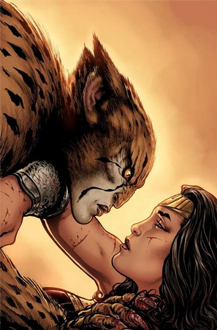 AKA: Barbara-Ann Minerva (Née Cavendish)
"Stupid, stupid... when I killed Aphrodite, I didn't just kill a goddess... I killed the power you didn't even know you had."

Barbara Minerva was an archaeologist from Britain, determined to prove the Amazons did exist (and show up her sexist colleagues while she was at it). It was her expertise with languages that got her called up to help Etta Candy and Steve Trevor communicate with Diana on her first arrival to Man's World. The two quickly began a friendship, after getting over the language barrier. Sadly, this didn't last, and somewhere along the way Barbara became consumed by jealousy of Diana's powers, and sought out a god of her own to worship. This saw her cursed into become the Cheetah, stricken with a hunger for human flesh and unable to turn back to who she was...