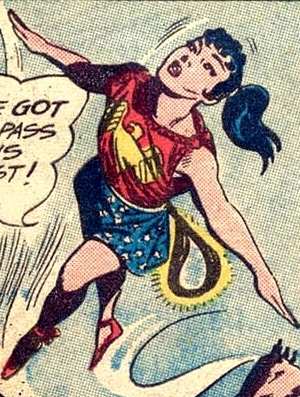 Young Princess Diana
AKA: Diana of Paradise Island
The original Wonder Girl wasn't meant to be a new character, it was just Wonder Woman on adventures at a younger age much like the first Superboy stories were for Superman. Then someone mistook some Silver Age style casual time travel stories depicting Wonder Girl and Wonder Woman together to mean Wonder Woman had a sidekick and the rest is history. 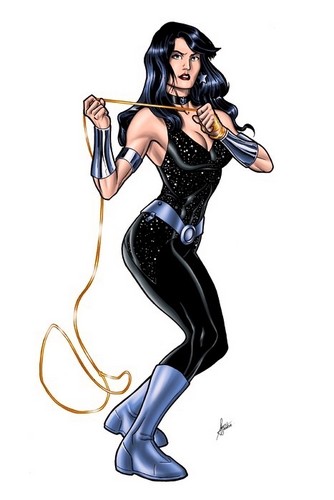 Donna Troy's past is... complicated. But basically, she's Diana's sister. She is known for being a sweet woman and a good listener, but she's faced much tragedy and a tangled past in her life. She was originally Wonder Girl of the Teen Titans, and now she forges her own path as simply Donna Troy. Comes equipped with the same bracelets as her sister, and a lasso that can override the mind of its victim provided that Donna's will is stronger than their own. She had stepped up to the plate as Wonder Woman when Diana was unavailable but is never strongly attached to that name and role.

The New 52 attempted to uncomplicate Donna's origin, but the route taken of "evil clone of Wonder Woman" was despised by fans. DC Rebirth then did away with this origin and reinstated her traditional one as the former Wonder Girl of the Teen Titans who was adopted by Hippolyta after being rescued by Wondy... only for James Robinson's run on Wonder Woman (Rebirth) to start mucking up her past by attempting to reinstate her New52 origin while contradicting Titans (Rebirth) and the memories of Wally West, who is known to have some of the most incorrupted memories in the whole 'verse. For more on just who Donna is see her Continuity Snarl page.

First Appearance: The Brave and the Bold #60. (1965) note  Or Wonder Woman #123. (1961). This is contested as some argue the Wonder Girl in WW 123 is depicted differently enough from young Diana, and similar enough to Donna that she's clearly an early appearance by the character.
Created By: Bob Haney · Bruno Premiani 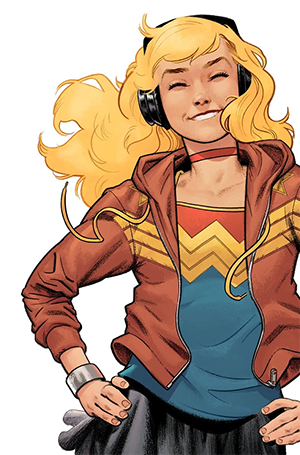 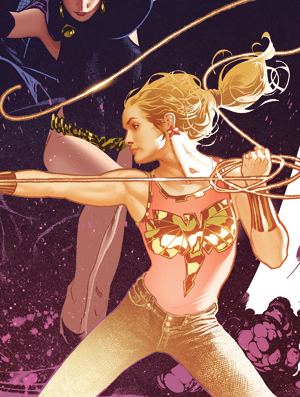 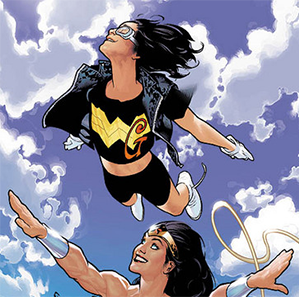 Cassie Sandsmark was the president of the Wonder Woman fan club in Gateway City. When she actually met Wonder Woman, she was so enthusiastic that she took artifacts from her mother's museum to help Wonder Woman fight. Impressed with her bravery, the Gods granted her powers of her own. Cassie became the leader of Young Justice and the Teen Titans and she eventually discovered that Zeus was her father.

Her New 52 incarnation is the daughter of Wonder Woman's half-brother Lennox, and derives her powers from an ancient armor named the 'Silent Armor' related to the demon Trigon. This character's provenance is called into question in Wonder Woman (Rebirth) by the revelation that the Olympians of the New 52 were fakes and implanted memories designed to hide the real Themyscira.

For her Earth One counterpart see Teen Titans: Earth One. 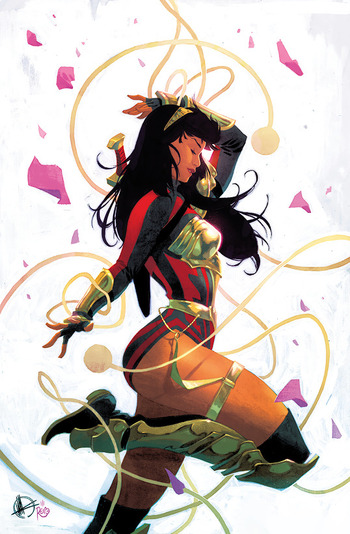 Originally debuting in DC Future State as the destined successor to the Wonder Woman mantle, Yara Flor is a Hot-Blooded Demi-God born from the union of a Amazon named Aella and a mysterious Brazilian deity. She was raised among the Esquecida, a tribe of Amazons who split off from Themyscira to establish a new society deep within the Amazon Rainforest. Alas, tragedy struck as her mother was murdered by members of the Greek Pantheon during a siege that burned their home to the ground. Fortunately for Yara, she would be spirited away to the United States by a fellow tribeswoman named Renata, where she spent the remaining years of her childhood in mundanity.

Having largely suppressed the traumatic memories of the attack, Yara would inevitably return to Brazil in order to seek the truth about her hectic past. Resulting in an adventure that would both reunite her with the surviving Esquecida and earn her the ire of the Greek Gods who sought to subjugate her for their own agenda. After participating in a controversial contest between competing Amazonian factions, Wonder Woman would formally crown Yara with the mantle of Wonder Girl… much to the latter's complete detestation. 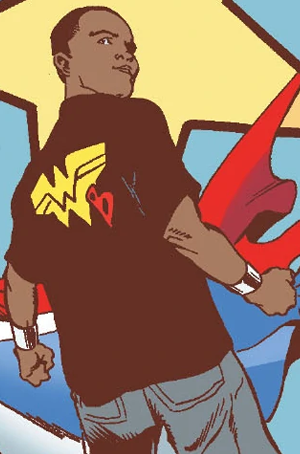 Bobby Barnes was the nephew of Wonder Woman's brief love interest Trevor Barnes. Bobby was a big fan of Diana's and followed her in the invisible jet while she was working as a superhero. While he traveled to Themyscira and was informally accepted as one of their own he did very little actual superheroics of his own as his mother did not like feeling like she was in competition with the Amazon princess.

The "Wonder Boy" of Earth 11 is a gender-swapped version of Donna Troy.