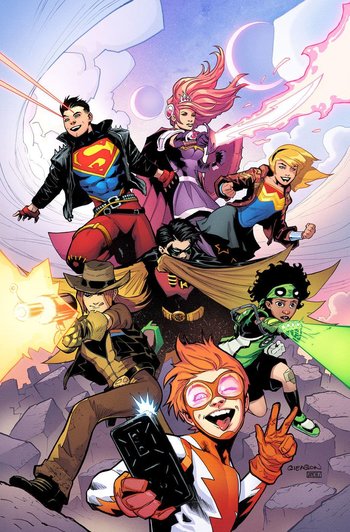 Young Justice is a 2019 comic series written by Brian Michael Bendis and drawn by Patrick Gleason, set to be the flagship title of Bendis' own Wonder Comics. The title will unite the original trio of Tim Drake, Conner Kent and Bart Allen, aka Robin, Superboy and Impulse, and they form the new iteration of Young Justice. Joining them is another iconic Young Justice character, Cassie Sandsmark aka Wonder Girl, and three newcomers in the form of Amethyst, Princess of Gemworld, who is set to get her own title down the line; Jinny Hex, the great-granddaughter of the legendary outlaw Jonah Hex; and Teen Lantern, an eleven-year-old Bolivian hacker named Keli Quintela who has somehow hacked a Green Lantern Power Battery.

The first arc involves Jinny, Tim, Cassie, Bart, and Keli coming to Metropolis for reasons of their own, only to end up fighting off an invasion from Gemworld, which has been affected every time Earth had a major crisis (which is to say, a lot — seven of them, in fact) and now they know it's Superman's fault. The five young heroes end up crossing into Gemworld in pursuit of the retreating invaders, where they meet Amethyst and Conner. Together, they must unite against the machinations of Dark Opal.

Not to be confused with Young Justice: Outsiders, which despite carrying the name and launching at around the same time, is not tied to this comic in any way.

The series ended after 20 issues.