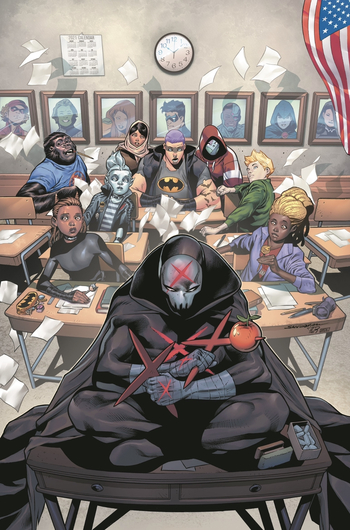 Teen Titans Academy is a Teen Titans centric title written by Tim Sheridan and drawn by Rafa Sandoval. It is part of the DC Infinite Frontier which starts post-Dark Nights: Death Metal.

After the fallout of the events in Teen Titans (Rebirth). Nightwing takes it upon himself to mentor the next generation of young heroes. With the help of Starfire, Cyborg, Raven, and Beast Boy, the Titans Leader will set out to make sure no Teen Titan ever goes down a dark path again.

The series will crossover with The Flash and Suicide Squad for the War for Earth-3 storyline, which sees the casts of all three titles visit the Mirror Universe of the DCU to retrieve Amanda Waller.

The series ended after 15 issues.