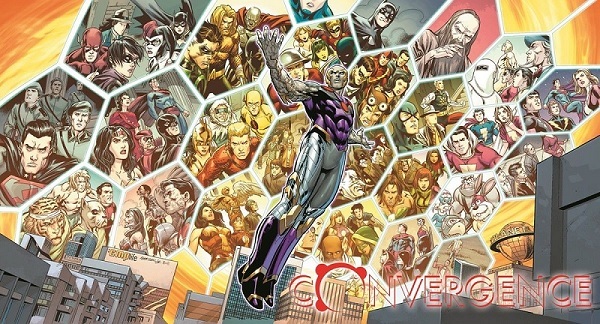 Convergence is a comic-book event published by DC Comics that replaces the "standard" DCU releases for April-May 2015, comprising a nine-issue weekly series telling the main story, and 40 two-issue monthly miniseries exploring what else is happening.

The event sees Brainiac using his access to the Vanishing Point to pluck cities out of three eras of DC history that predate the New 52: the pre-Crisis on Infinite Earths era, the pre-Zero Hour: Crisis in Time! era, and the pre-Flashpoint era.note The pre-Zero Hour era and the pre-Flashpoint era are from the same version of the DC universe, just at different points in time. Additionally, he also captured cities from varous Alternate Universes from the DC Multiverse, such as the Tangent Comics universe, the WildStorm universe, and the Flashpoint universe. With 40 captive cities in total, Brainiac takes them to the mysterious world of Telos within domes, to observe them. But when Brainiac mysteriously vanishes when attempting to gain yet another city from a doomed timeline, Telos itself releases them to see which world deserves to live amongst them all. The ensuing chaos sees a massive conflict that pits hero against hero and spans decades of continuity.

The event is notable for bringing back the pre-Flashpoint versions of the DC Universe heroes, as well as bringing an end to the New 52 banner ahead of the then-incoming DC You relaunch (though 25 titles maintained their numbering and continuity).

There were three comic series that spun off from the event:

Tropes in this event include: