Literature / The Dagger and the Coin 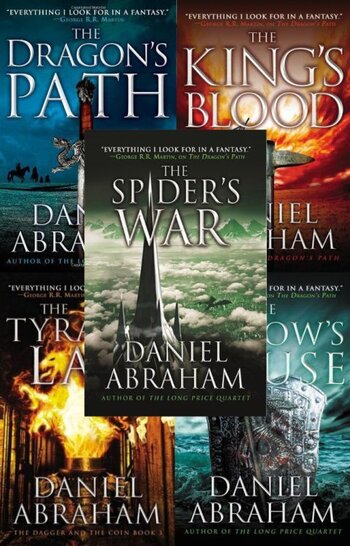 In ages of the distant past the world was ruled by dragons who united the lands with a network of indestructible jade roads. They also divided the human race into thirteen distinct subspecies. These ranged from the "normal" Firstbloods, to the canine Tralgu, to the insectoid Timzinae. Other sub-races had subtler traits, such as the Dartinae whose eyes glow - even through their eyelids - and Cinnae with their pale, elfin appearance.

Now the dragons are no more; victims of a civil war of mutual destruction, the jade Dragon Roads and the divided human race the last remaining traces of their influence. As the story begins the Firstblood kingdom of Antea has declared war upon its former vassal, the Free City of Vanai. Nobleman Geder Paliako is a reluctant soldier and the butt of his comrades' practical jokes. But he soon discovers that the war for Vanai has deeper, darker political motives and he is a pawn in a political game he can't hope to understand, let alone win.

Meanwhile, Marcus Wester, a military hero turned mercenary has problems of his own. He has to find a way to guard a merchant caravan fleeing Vanai without his usual soldiers, and one of the cart drivers is hiding his real identity and hauling a cargo worth more to the Anteans than anything else Vanai has to offer.

Elsewhere, in the far-flung deserts of Keshet, one monk learns a disturbing truth about the goddess he worships and others make plans for her return...