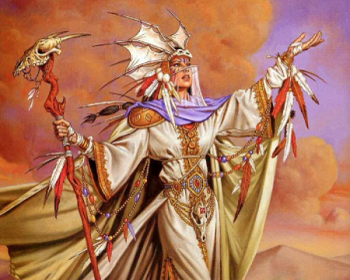 The job always comes with a silly hat.
Advertisement:

A character (or several) that leads the religious group that this character would belong to. These characters can be either good or evil, depending on whether the religion in question is a Saintly Church or Religion of Evil, respectively. It can be a bit more iffy in a Corrupt Church, since the character may be a Clueless Boss who does not know of its corruption, or may be working to root it out. The High Priest usually resides in a Vatican-style Holy City, especially if the church worships an Abrahamic-analogue God.

A common variation is for the characters to be Priest Kings, who lead their people both spiritually and physically. This is particularly common if they lead a theocracy.

Expect Authority Equals Asskicking to be in full effect in fantasy fiction, especially if Religion is Magic.

The Pope is the Trope Codifier, hence why many High Priests reside in Vatican-style cities, worship Abrahamic-analogue Gods, and borrow Catholic aesthetics. Compare the God-Emperor, who usually leads and is worshiped by the religion in question. There is a good chance he will carry a Staff or Hat of Authority. If the High Priest is also the leader of the government, you've likely got The Theocracy. For a priest who's another kind of high, see Junkie Prophet.