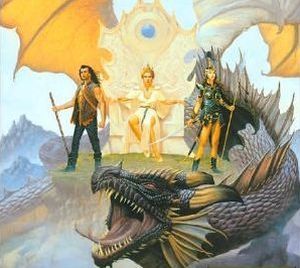 The Dragonvarld trilogy is a series of Fantasy novels by Margaret Weis, released between 2003 and 2005. Dragonvarld was the first fantasy world (although not the first solo project overall) Weis created without her frequent collaborator Tracy Hickman.
Advertisement:

The books are set in a world shared by humans and dragons. Dragons mostly keep to themselves, and have a law which prevents them from killing or meddling with humanity. However, one dragon, Maristara, broke that law, and set herself up as the ultimate power in a mountainous kingdom called Seth. The series deals with the consequences of that interference.