Gender Is No Object 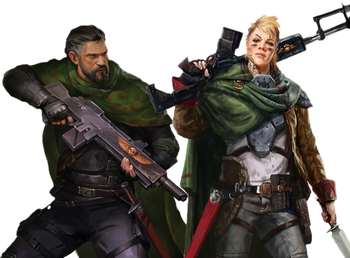 Male, female, doesn't matter as long as you can fight and die for the Emperor.
A lot of media (especially science fiction and fantasy) features societies with no gender restrictions. Women fight alongside men, in the same combat roles, in command, and so on. Because it's a societal norm, no one considers this unusual. Hereditary monarchies can be ruled by women as well as men, despite a real-world historical restriction on women ruling the kingdom in many countries.
Advertisement:

This is not the same as splitting the sexes up into segregated units. When this trope is used, mixed units are the norm, and by extension often a completely integrated society as well in which the only difference between the sexes, in a social sense, is that one can get pregnant and the other can impregnate. In a Science Fiction story where test-tube-and-incubator babies are common, even this is removed and if the soldier is encased in armor, you can't tell what gender they are, and it doesn't matter anyway.

Be careful: not every story about women serving in the military is an example of this trope. Stories where the majority of military units are male and occasionally you find a girl do not apply. Nor do militaries where women are common but are restricted to certain roles (especially if those are non-combat roles). Nor do stories where there are women in combat roles, but they are consistently portrayed as falling into the Damsel in Distress or Faux Action Girl trope.

This can be a Justified Trope, especially in futuristic settings where advances in technology have made physical differences like gender more or less irrelevant for soldiers. In medieval fantasy settings, authors may introduce some form of safe, reliable Fantasy Contraception, or the existence of inborn magic powers can be portrayed as making differences in size and strength less relevant, or there may be other social pressures encouraging gender equality (although all of these may or may not be convincing, depending on how well they're handled). If the setting is not Earth and/or the characters are not normal humans, they may just have less sexual dimorphism. On the other hand, there are also plenty of cases of lazy or thoughtless worldbuilding, as well as cases where the author simply felt they needed no justification beyond Rule of Cool.

There are a wide variety of possible reasons for this. Sometimes it's pure Author Appeal: the author thinks a mixed-sex military setting is simply more awesome than a segregated one, or wanted to write about heterosexual relationships within such a setting, or wanted to have a female protagonist in such a setting without having to worry about showing her struggling with prejudice (which would become Anvilicious rather quickly). In role-playing games (video or tabletop), it may be done to make sure players are never penalized for wanting to play a character of their own gender. Sometimes it's an Author Tract, with the author trying to make a point about how gender restrictions are good or bad.

For a related, video game-specific trope, see Purely Aesthetic Gender. Not to be confused with a person for whom gender is no object.