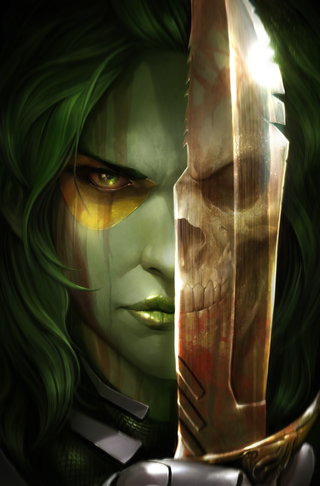 The last of the Zen-Whoberis race, Gamora is the adoptive child of Thanos, raised to defeat The Magus. It was during this time in her life that Gamora became known as "the deadliest woman in the whole galaxy", and exacted revenge on The Church of Universal Truth, who'd been responsible for the genocide of her people.

After working with Adam Warlock to stop his older version, Gamora realized the true evil of her adoptive father's ways, and teamed up with Captain Marvel, Warlock, and future Guardian Drax the Destroyer to take him down. When Thanos mortally wounds Gamora and her allies in in battle, Warlock absorbed their souls into his Soul Gem, where they existed in a realm called Soulworld.

Gamora and her friends lived there in peace together for some time —until the events of The Infinity Gauntlet— in which Thanos finally completed his quest to form the titular object, using it to remove Gamora from existence. After Nebula restored her into being with the Gauntlet, Warlock soon gained its possession, starting to go mad with power because of it. For this reason, the Living Tribunal decided that each of the Infinity Gems must be spread among Gamora and some others, ultimately calling them the Infinity Watch. Gamora was given keep of the Time Gem — she couldn't consciously use the thing, but it did give her sporadic precognitive dreams and visions.

When Gamora left the Infinity Watch, she returned to being a mercenary. Her quasi-romantic relationship with Adam Warlock then became official, and they ran off together to a pocket dimension.

Gamora wouldn't return to prominence for many years after that, until the Annihilation story of the early Naughts helped reinvigorate Marvel's cosmic line of characters and comics. Now possessing a sword called The Godslayer, Gamora had since left Warlock to be on her own, leading a group of female warriors called The Graces. She'd also entered a relationship with Richard Rider, better known as Nova at the time.

Soon afterward, Gamora becomes a member of the new Guardians of the Galaxy, working with characters like Drax the Destroyer and Star-Lord. This is perhaps what's she best known for among recent comic readers, and has been a core member of the team since their inception in 2008.

With the Marvel NOW! initiative, Gamora (and her fellow Guardians) were further implemented into the greater Marvel Universe, receiving a new volume of their book while also featuring in titles like Avengers Assemble, and a crossover called The Trial of Jean Grey had them meet the X-Men. She also became acquainted with Angela during this time, and enjoyed a brief sexual relationship with Tony Stark when he joined the Guardians for a spell. An issue of Guardians Team-Up saw Gamora team-up Marvel's other preeminent green woman, She-Hulk.

Gamora emerged as a major player of the Black Vortex story —yet another crossover with the X-Men— where she let herself submit to the titular artifact, gaining cosmically-enhanced powers in the process; she was one of the few who didn't relinquish their new powers at the story's end.

Shortly before the incursion between Earth-616 and Earth-1610, Gamora left the Guardians when her cosmic abilities sensed impending doom. During Secret Wars, she starred in the limited series Guardians of Knowhere, in which Gamora served as a watcher of Knowhere, otherwise known as Battleworld's moon.

As part of the All-New, All-Different Marvel universe that emerged from Secret Wars, Gamora headlined her first ongoing title, note though it didn't show up until 2016 had a brief role in the new volume of Contest of Champions and making guest appearances with the Guardians in the meantime.

In the 2018 Crisis Crossover Infinity Wars she takes the codename Requiem and starts the series off by killing Thanos.

Gamora also appears in the Marvel Cinematic Universe, played there by Zoe Saldana. She first appeared in Guardians of the Galaxy, and the film's runaway success has guaranteed a full trilogy of films; a sequel, Guardians of the Galaxy Vol. 2 was released in 2017, with a likely threequel to follow in 2020. Given her ties to Thanos —the MCU's big bad— she appears in Avengers: Infinity War.