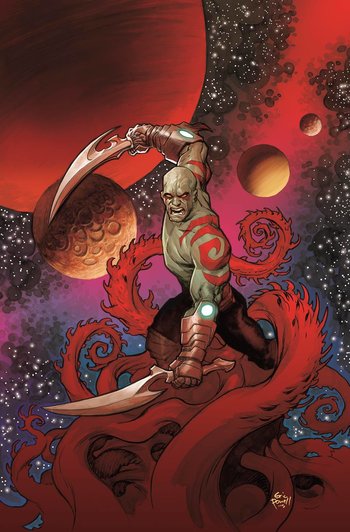 Before becoming the Destroyer, Drax was a human man named Arthur Douglas. Along with his wife and daughter, Douglas was killed by Thanos, thing his existence had been revealed to Terrans who'd seen him. (He would later learn that his daughter actually survived the accident and became the Avenger known as Moondragon.)

After his death, Douglas was resurrected into a stronger body (by the Titanian god Kronos) for the sole purpose of killing Thanos, newly christened as Drax the Destroyer.

For many years following, Drax remained a staple of the cosmic Marvel Universe, most notably appearing in The Infinity Gauntlet and Annihilation. Despite his death in the latter, Drax was then drafted to the new Guardians of the Galaxy in 2008, and has more or less remained a stalwart member of the team since then.

Drax has appeared often in other media, most notably within the Marvel Cinematic Universe. Portrayed there by former WWE superstar Dave "Batista" Bautista, this version of the character is vastly simplified from his comic book counterpart. He made his debut in 2014's Guardians of the Galaxy, reprising the role in its 2017 sequel, and then again in 2018's Avengers: Infinity War.