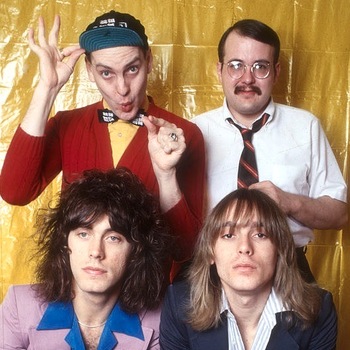 Cheap Trick created a substantial fanbase in the late '70s with a hard-edged yet melodic pop sound that combines the tunefulness of The Beatles with the speed and energy of Punk Rock, making them probably the most popular Power Pop band. Their biggest hits include "Surrender", "I Want You to Want Me", "Dream Police" and "The Flame." Cheap Trick also performed the theme song "That '70s Song" note  a rearrangement of "In the Street" by Big Star, for That '70s Show from the second season onward and the theme song "Baby Muggles" for The Colbert Report. Songs by the band even appear in two of the cult animated films of the early 1980's, Rock and Rule with "Born to Raise Hell" and "Send Love Through" with Debbie Harry and Heavy Metal with "Reach Out".

Cheap Trick continues to tour, albeit without original drummer Bun E. Carlos since 2010; he was replaced with unofficial member and touring drummer Daxx Nielsen, Rick's son. Carlos is still involved with the band in a limited fashion, mostly business, and all four original members played at the band's induction into the Rock n Roll Hall of Fame in 2016. The latest iteration of the band has released three albums in the span of 20 months; two studio albums and one Christmas album, with all three getting positive reviews, continuing a streak started with 2006's "Rockford".

The band is most popular in Japan, where they have remained popular superstars since their first album — what's more, they only climbed to similarly large popularity in the USA with the 1978 Live Album At Budokan, initially a Japan-only release. They have been often referred to in the Japanese press as the "American Beatles".

Bands citing Cheap Trick as an influence include Nirvana, Weezer and several dozen Power Pop bands. Kurt Cobain once said about Nirvana: "We sound just like Cheap Trick, only the guitars are louder."

Some of their famous songs include: