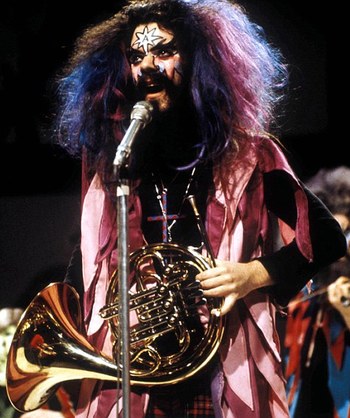 "Everyone you meet coming down the street just to see my baby jive!"
"Roy Wood loved pop. He was a super-fan. He wanted to be all of pop, all at the same time."
— "Yeah Yeah Yeah: The Story of Modern Pop", Bob Stanley, 2013
Advertisement:

Roy Wood (born 8 November 1946) is a British singer-songwriter and multi-instrumentalist, hailing from Birmingham and best known for his band Wizzard's undying 1973 Christmas hit, "I Wish It Could Be Christmas Everyday". However, there is a lot more to his career than that. Roy got his start as the creative lead of The Move, formed in 1965. After The Move came to an end in 1971, Roy, along with Jeff Lynne and Bev Bevan, went on to form Electric Light Orchestra, which in its initial incarnation was a very different band to the lush, Beatlesque pop band they became under Lynne's leadership, being much more raw, experimental and Progressive Rock-influenced, as exemplified by their early single "10538 Overture". However, Roy's tenure in ELO was short-lived, only appearing on their first two albums, as Creative Differences between Wood and Lynne resulted in Wood departing partway through the sessions for ELO 2 and forming the Glam Rock band Wizzard.

In the meantime, Roy had recorded and released his first solo album, Boulders, generally regarded as his best work, and bringing his Genre Roulette tendencies to the forefront, shifting from Beach Boys-influenced Baroque Pop, to folk, to 50s-style classic Rock & Roll, to gospel and then back again. Not only that, but Roy played nearly every single instrument on the album, including unusual instruments such as the Cittern or Bouzouki. Boulders was critically acclaimed, and has gone down in history as one of the underrated pop gems of The '70s.

After recording and releasing Boulders, Roy moved full-time into working with Wizzard, and developed an interesting formula. The band's singles would all be catchy Glam Rock, but their albums would be whatever Roy wanted them to be. Wizzard's first album, 1973's Wizzard Brew, is a good example of this, being a Jazzy Progressive Rock album that was pretty much completely unlike the singles the band was releasing at the time. Roy then decided to follow this up with something even more ambitious, a double album consisting of one disc of 50s Rock & Roll pastiches and another disc of experimental jazz-rock. Unfortunately, the label balked at this, instead releasing the Rock&Roll disc in 1974 as Introducing Eddy and the Falcons, while the jazz-rock disc only saw release in 2000 under the name Main Street.

Wizzard broke up in 1975, leaving Roy to start work on his next solo album, 1975's Mustard, which was a much more ambitious and densely-produced album than the eccentric, homemade Boulders, but was still an unusual album, showing that Roy's eclectic Genre Roulette sensibilities were still in full flow, with the title track being a pastiche of 1940s singers The Andrew Sisters, "Get On Down Home" being very Led Zeppelin-esque, and other tracks showing his love for 50s Rock & Roll and The Beach Boys. The album also makes heavy use of the bagpipes, and features Phil Everly of The Everly Brothers on vocals on "Get On Down Home".

Mustard, while critically acclaimed, was a commercial flop, and much like Boulders before it, has attained a reputation as an underrated lost classic. Roy's output began to slow after this, and particularly since the start of The '80s, he's largely focused on touring and performing out of disillusionment towards the music industry. However, his position as one of Britain's pop geniuses, albeit a relatively unsung one, remains secure.

Any old trope will do: