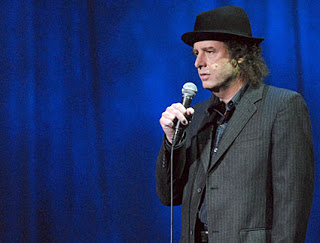 "Thanks."
"Like my daddy used to say, 'worst comes to worst, we're screwed'."
Advertisement:

Steven Alexander Wright (born December 6, 1955) is a Boston-born comedian with a trademark deadpan delivery. Wright popularized a new style of Stand-Up Comedy, consisting of a series of short, surreal statements with odd internal logic.note Wright did have a few predecessors for this style. Jackie Vernon (best known today as the voice of Frosty the Snowman) had a remarkably similar act in The '60s Some famous examples include, "I woke up one morning to find that everything in my apartment had been stolen and replaced with an exact replica", "I put instant coffee in the microwave and almost went back in time", or "I bought a packet of instant water but I didn't know what to add". Sometimes he throws in bizarre songs or rambling anecdotes that go absolutely nowhere. You can hear traces of his style in later comedians like the late Mitch Hedberg and Demetri Martin.

You may know him as the super-bored DJ voice on the radio in Reservoir Dogs. He also frequented late night talk shows, debuting on The Tonight Show in 1982, and was a recurring guest on The Late Late Show With Craig Ferguson. Also, in the late 80s, he won an Academy Award for writing and producing the short film The Appointments of Dennis Jennings. His acceptance speech began "Now I'm glad I cut the other 90 minutes out."

"Don't think about it; it doesn't mean anything."