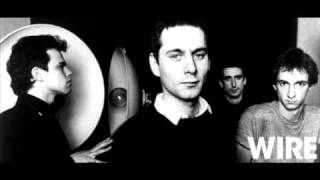 Influences:Influenced:
Advertisement:
"I never know which version I'm going to be
I seem to have so many choices open to me"
—Wire, "40 Versions"

Wire are a Long Runner Post-Punk band formed in Watford, England in 1976 by Colin Newman (vocals, guitar), Graham Lewis (bass, vocals), Bruce Gilbert (guitar), and Robert "Gotobed" Grey (drums). note  There was also George Gill (lead guitar), who was thrown out before their first release and henceforth rarely spoken of.

Wire are best known for their first three albums:

Each set the trend that Wire would later become notorious for: Every album a New Sound Album, every tour a showcase of new material, regardless of fan or critic's opinion.

It was this incorrigibility, as well as internal tensions, that lead the band to leave EMI/Harvest in late 1979, then go on hiatus in 1980, each member retreating to various solo projects. Lewis and Gilbert formed Dome (a.k.a. Cupol, Duet Emmo, Gilbert & Lewis...) and experimented with confusing the hell out of everyone whilst wearing awesome hats; Newman, Gotobed and producer Mike Thorne, on the other hand, made eccentric, punk-inflected pop music under Newman's name.

And then, in 1985, without warning, Wire resurfaced, playing sets consisting solely of new material.

From 1986 to 1989, the band released three albums of darkly satirical Synth-Pop, to the chagrin of many of their punk-minded fans and varying critical opinion. Undeterred, the band soldiered on, experimenting with drum machines, early MIDI technology and remixing, their interests culminating in the 1990 releases of The Drill (consisting of numerous, wildly different versions of their '80s Signature Song "Drill") and the much-derided Manscape.

Seeing himself as irrelevant to the band's new sound, Robert Gotobed quit in 1991; in acknowledgement of his departure, the band changed their name to Wir (pronounced either as "wire" or "veer") and released The First Letter, which produced a Black Sheep Hit in the mournful dance number "So and Slow It Grows". The success was short-lived, and Wir dissolved in 1993.

Aside from the occasional remix project and an epic-length performance of "Drill" commemorating Bruce Gilbert's fiftieth birthday in 1996, Wire remained silent until 1999, at which point they reformed for a series of retrospective shows. Soon, they began to perform and release new material again, starting with the release of the Read & Burn EP series and culminating with 2002's Send. The new releases saw a return to the raw ferocity of Pink Flag married to the lyrical and technological advancements of their '80s releases and production influences taken from modern drum 'n' bass and noise rock, and were greeted with massive enthusiasm from fans and critics alike.

In 2003, Bruce Gilbert, grown bored of playing guitar and interested in pursuing his solo work, amicably left the group; Margaret Fiedler McGinnis of Laika was recruited to replace him as touring guitarist. Subsequent albums, such as 2007's Object 47, have been more subdued and widely spaced, though the band's touring schedule remains formidable. For their 2010 tour, McGinnis was replaced by Matt Simms of It Hugs Back, who became a full member of the band for 2013's Change Becomes Us.