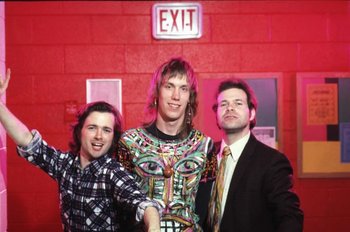 Violent Femmes are an American folk punk from Milwaukee. The band consisted of singer/guitarist Gordon Gano, bassist Brian Ritchie, and drummer, Victor Lorenzo, who was replaced with Guy Hoffman in 1993. The current drummer is Brian Viglione. Along with acts like R.E.M. and Hüsker Dü, the Femmes were one of the first commercially successful alt rock bands. Their debut album, Violent Femmes, released in 1983, containing their most successful song, "Blister in the Sun", among other notable tracks, went platinum.They disbanded in 2009; however, as of 2013, they are active again.