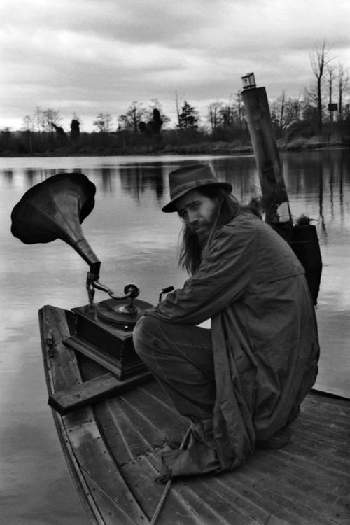 From The Other Wiki...

Jason Webley (born June 1, 1974) is a musician who began as a busker, playing accordion in the streets of Seattle, but has since moved indoors and on stage, playing venues and festivals all across the world. His music is a combination of folk, gypsy, punk, and sea shanties.

Webley is characterized also by a mix of funny, sad, and in one case thoroughly scary songs. His tracks include instruments such as the accordion, guitar (acoustic and electric), harmonica, piano, marimba, and glockenspiel. His signature clothing is a porkpie hat and a black trench coat, which, from 2000-2004, he'd ritualistically burn every Halloween, where after a concert he'd lead his audience into a park where his head would be shaven, followed by him being put in a coffin and being driven off in a hearse, disappearing for six months, re-emerging either on Mayday or his birthday.

Another notable thing is that, in his youth, he ran off to join the circus...sort of. Rather, he went out into the world to busk on the streets for as long as his money would last him. That went rather well for him, apparently, as he has founded Eleven Records and has a five-album discography. Most of which is awesome, if you're into that sort of thing.

Together with Amanda Palmer, he discovered the twin singers Evelyn Evelyn, and has been touring with them for a while.

He has been compared to Tom Waits in style of music and appearance. Comparisons to Jacques Brel aren't entirely unwarranted, either (in a good way).

Tropes that feature in his works: