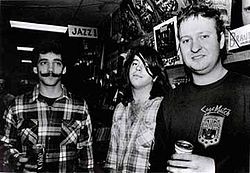 Hüsker Dü were an American Hardcore Punk/Alternative Rock band from St. Paul, MN who were together from 1979–88. They were composed of singer / guitarist / lyricist Bob Mould, bassist Greg Norton, and drummer / singer / lyricist Grant Hart. While they never had a hit record, among their most well-known work is the Concept Album Zen Arcade, the follow-up New Day Rising, their Cover Version of The Byrds' "Eight Miles High", and their single "Don't Want to Know If You Are Lonely", which was notably featured in the film Adventureland and covered by Green Day. They are regarded as seminal in the creation of the Alternative Rock and Post-Hardcore genres.

Rising tensions between the two primary songwriters, Mould and Hart, eventually led to the band's breakup in 1988. Since then, Mould and Hart have launched their own solo careers, while Norton became a restaurateur in the Twin Cities. Bob Mould has released an autobiography called: See a Little Light: The Trail of Rage and Melody, while Grant Hart was the subject of a documentary: Every Everything, the Music, Life & Times of Grant Hart.

Although mainstream success eluded them, the influence they had on bands such as Dinosaur Jr., The Pixies, Jawbreaker, Green Day, Foo Fighters, and a plethora of others has secured their place as one of the most important bands in modern rock music.

Sadly, Hart passed away in September 2017.

They also released assorted singles, many of which feature non-album tracks on their B-sides; "Eight Miles High", meanwhile, has an A-side not featured on any album.

Never Troping to You Again: