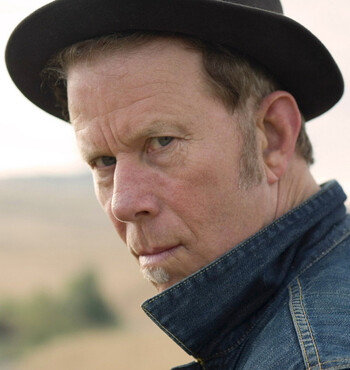 "We all hear our own stories in our favorite songs (that is why Tom Waits sings in werewolf language—you can pretend it is about anything you want!)."
— John Hodgman, More Information Than You Require
"This is a man who writes songs for the angels and sings them in the voice of Beelzebub. The Carny, the Sideshow, the circus freak show is a world I've always wanted to be in, and that's exactly where Tom Waits is."
— Terry Gilliam
Advertisement:

Describe Tom Waits here. Okay... but how? Well, everyone seems to use the cliched phrases like "whiskey-soaked", "gravelly-voiced", "barfly", "hobo", "raconteur", and "troubadour".

With that out of the way, Thomas Alan Waits (born December 7, 1949 in Pomona, California) is an innovative musician, generally classified as alternative but borrowing heavily from European and American folk music, gospel, lounge music, pop, the blues, cabaret, and occasionally country and even rap (he beatboxes on the 2004 album Real Gone and Atmosphere's When Life Gives You Lemons, You Paint That Shit Gold, and he appears on N.A.S.A's "Spacious Thoughts").

His work can be divided into two distinct eras: his jazzy, lounge singer period, lasting from the '70s to the early '80s, and the reinvented, experimental sound of 1983's Swordfishtrombones album on, and his shift to a mysterious, Carnival-and-Sinister-Junkman persona. This shift was caused by his abandonment by Asylum Records, his breakup with Rickie Lee Jones and his marriage to his co-songwriter and muse Kathleen Brennan. Brennan introduced him to the music of Captain Beefheart, whose influence can be seen in "Swordfishtrombone" and later albums.

He is known for his theatricality, dark and dense lyrical style, and a charming sense of humor - he's one of the few musicians that tend to get long interview sessions on late night talk shows, occasionally getting more laughs than the host. He wrote the scores of four musicals: "Franks Wild Years" [sic], written with Kathleen, and his collaborations with Robert Wilson, "The Black Rider", "Alice," "Woyzeck" (the last being released as Blood Money).

He has also acted in several films, notably Coffee and Cigarettes as himself, Down by Law as a radio DJ who gets framed, Mystery Men as a Mad Scientist, Bram Stoker's Dracula as Renfield, and Wristcutters: A Love Story as Kneller, whose dog is missing. He plays Mr. Nick (the Devil) in The Imaginarium of Doctor Parnassus, which also happens to be Heath Ledger's last film, and he was a bird named Virgil in Rosto A.D.'s Monster Of Nix. He also played one of the eponymous Seven Psychopaths.

He was inducted into the Rock and Roll Hall of Fame in 2011.

References to Waits were a Running Gag on Mystery Science Theater 3000 and continue on RiffTrax, mostly because Kevin Murphy is a big fan.

Also, for some reason, he's the curator of The Museum of Everything.

Albums with their own pages: