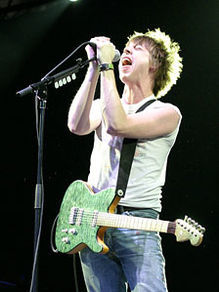 The Vines are an Australian Alternative Rock band who hit it big worldwide as part of the early 2000s Garage Rock revival. The band is fronted by guitarist and vocalist Craig Nicholls, and the original lineup included Craig's former McDonalds co-worker Patrick Matthews on bass, and David Oliffe behind the kit.

The band formed in 1994, and were initially a Nirvana cover band that eventually began to write their own material. When they did, it became a Grungey take on Beatle-esque British pop music that occasionally veered into psychedelia. Their first single wound up creating a ton of buzz at home and in the UK, and after Hamish Rosser replaced Oliffe, they soon relocated to Los Angeles to record their debut album, which became 2002's Highly Evolved. The album, lead by popular singles "Get Free" and "Outtathaway," made a big splash, going platinum in Australia and gold in the UK and America, and it won them a Rolling Stone cover story. As a result, they were firmly wedged them into the Garage Rock scene of the time, featuring such luminaries as The Strokes, The Hives and The White Stripes.

A follow-up, Winning Days, recorded in New York, was released in March of 2004, preceded by the singles "F.T.W." and "Ride." By this point, Craig Nicholls had developed a reputation for rough, even reckless, performances, highlighted by his garbling of words, writhing around and blithely detuning his guitar during performances. Not only was the band kicked off The Tonight Show With Jay Leno after Craig damaged the set during rehearsal, he had an infamous meltdown during a performance on The Late Show With David Letterman that left Dave visibly flustered. But the Winning Days promotion came to a screeching halt when a performance at Triple M radio in Sydney abruptly ended with Craig Nicholls berating the audience, and striking a female photographer. Patrick Matthews walked out on the band immediately. A resulting court case from the assault charges revealed that Craig deals with Asperger Syndrome, and he was acquitted on the condition that he seek treatment immediately (he did).

After quitting drugs and cleaning up his diet, Craig and a revamped Vines pressed on with 2006's Vision Valley, noted by more focused songwriting and markedly shorter songs. The promotion of the record was cut short after Craig's social struggles caught up with him again. They were dropped by Capitol Records around this time, though the label did release The Best Of The Vines in 2008. Studio album Melodia followed in the summer of that year on the Australian label Ivy League, again with slightly limited promotion.

By the time of the promotion of their fifth album, 2011's Future Primitive, Craig Nicholls was the only original member of the band left, with a rotating rhythm section. This didn't slow down Craig - he wound up writing enough material for a double album, which materialized on PledgeMusic as Wicked Nature in 2014.

Craig's younger sister, Jess Nicholls, has been noted to be Craig's "keeper," a middle person between him and management, and taking care of the Vines' social media. This works out well, since in recent years, Craig's become a bit of a loner, shunning most modern technology like smartphones and computers, and keeping his socializing to a minimum.

Craig is also part of an electronic-oriented side project, White Shadows.

Tropes associated with The Vines include: