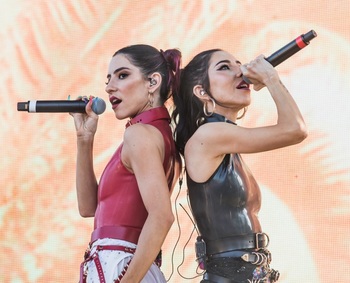 I feel so untouched and I want you so much that I just can't resist you...
Advertisement:

The Veronicas are Jessica and Lisa Origliasso, both born on December 25, 1984. Twins from Brisbane, Australia, both are self-taught guitarists and piano players known internationally for their catchy pop songs and sisterly antics.

Their first album, The Secret Life Of... was punky acoustic Power Pop, their second, Hook Me Up was dancey synthpop, and their third, The Veronicas is dark progressive pop with country, electronic and blues elements. Jess has described their music as like "if you melted a Barbie into some black nail polish and then sprinkled it with glitter and then maybe put some spit on it."

During the lack of album releases, Lisa started a side project called "Dead Cool Dropouts" with her close friend Tyler Bryant of Tyler Bryant & the Shakedown with Garageband, focusing on acoustic breakup songs; Bryant later contributed to their third album. Jess also had her own side project called Cakehole in 2007, which has a pleasant song called "Stab You."

After being stuck in Development Hell for over five years, they split from Sire Records and signed with Sony Music. Since then, they released their long-awaited third album, put out three singles from said album, and began writing their next. They have planned on filming a documentary, writing a book, and recording an EP as well as touring.

They briefly appeared as substitute coaches for The Madden Brothers of Good Charlotte on The Voice in 2016. They released a non-album single "In My Blood" while coaching, and it is intended to be a lead up to their fourth album.

Not to be confused with Betty and Veronica, but they did appear in a comic book

◊ with Archie Comics due to a trademark dispute solved by cross-promotion.

I'd never let you down, down