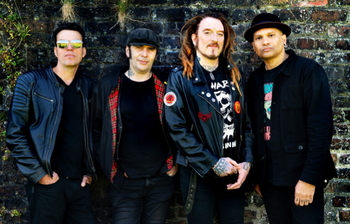 L-R Ritch, Danny, Ginger, CJ
The Wildhearts are a British rock band, currently consisting of guitarist/vocalist Ginger, guitarist/vocalist CJ, bassist Danny McCormack, and drummer Ritch Battersby. Formed in 1989 by Ginger and CJ, the band went through a number of bassists before settling on Danny, while the drum stool continued to be vacated on a fairly regular basis until Ritch arrived after the release of their debut album.
Advertisement:

In 1989, Ginger had been sacked by former band the Quireboys for being too drunk, and was told by Sharon Osborne that he needed to sort his life out. The story Ginger tells is that he went to a station in L.A. with a bottle of whisky which was his only remaining possession, and fell down the stairs. As he fell, he told himself if the bottle smashed he'd slash his wrists with it - if it remained intact, he'd form his own band. The bottle survived, and the first of many line-ups of The Wildhearts was formed soon afterwards.

Since then the band have fought, split up and re-formed many times, taken enough drugs to incapacitate a decent-sized army, and spawned numerous spin-off bands and side projects. They also released a series of albums which, for the most part, were full of catchy hooks, glorious harmonies, and massive riffs. These were generally seen as too heavy for the pop kids but too poppy for the metal crowd and the band, while retaining an incredibly loyal hardcore following, never hit the big time - although their tremendous capacity for drug-fuelled self-destruction has undeniably also played a part.

The band are still going strong though, with a couple of well-received recent albums under their belts, and that loyal hardcore following still sees them put on successful UK headline tours on a regular basis.

They don't seem to have fought with one another for a while either.