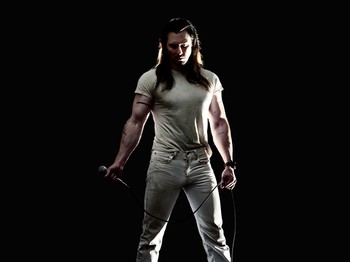 Over a long and varied career, Andrew is most famous for his boisterous approach to rock music, characterized by shouted, chanted vocals, multi-layered guitars, huge pop hooks and keyboard flourishes. His sound was mostly a poppy metal sound of pure adrenaline, but, starting with his second album, he tried some experimentation, most notably 55 Cadillac, an album made up of piano instrumentals. Andrew tours with his signature sound both with a full band (with up to three guitar players) and with a more minimal setup - himself, a keyboard programmed with songs and a backup singer. Andrew is also famous for his persona - a relentlessly optimistic, somewhat philosophical man with an insatiable desire to motivate, or "party," as he usually refers to it.

It is very likely that he is the biggest Cloud Cuckoolander in rock.

His most famous record to this day is his debut, I Get Wet, which has the famous cover

of his nose bleeding profusely.note To get the blood, Andrew initially tried smashing a brick into his face - you read that correctly - although that wasn't enough blood. He than added some of the blood of an animal he got from a butcher. The complete discography:

In April 2015, Andrew started his own Saturday morning radio show, America W.K. on Glenn Beck's The Blaze network, but it ended at the end of the same year.

You can read more about all the insane/awesome stuff Andrew has done over at That Other Wiki.