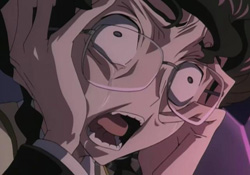 Nina just had a very bad day.
"All it takes is one bad day to reduce the sanest man alive to lunacy."
— The Joker, The Killing Joke
Advertisement:

When a character is Not Himself, but for real, and (usually) permanently. In the course of a single episode, the character goes through something traumatic enough to change their personality forever (even Freak Outs that are temporary have lasting effects on a character). It could be a Mind Rape or a really Awful Truth, but it has to be pretty nasty. Sometimes a Freak Out is foreshadowed episodes in advance, but usually, it just comes out of the blue.

A well-done Freak Out makes the audience freak out as well, and provides more Character Development than an entire season could in the same. Sadly, this is rare — all too often, it is used as a desperate gimmick to "revitalize" a show. Viewers should beware if a Freak Out comes due to Executive Meddling, if it comes after several seasons, if it makes the character Darker and Edgier, or if it makes the character hornier. If all four happen at once, chances are high that the show is Jumping the Shark.

May double with a He's Back! or a Became Their Own Antithesis. If the character's Freak Out turns them into a bad guy, it's also a Face–Heel Turn. Can also be compared to Heroic BSoD (a milder and less permanent freak-out, usually resolved before the climax) and Laughing Mad. A villain doing this just as the tides turn against them is having a Villainous Breakdown. A character having a freak out due to uncertainty regarding who or what they are is having an Identity Breakdown. May overlap with Break the Cutie and Go Mad from the Revelation. Heroic Safe Mode is the mind's attempt to avoid this. May involve Broken Tears.

Has nothing to do with the words spoken by Freakazoid! to transform, nor the refrain from R&B band Chic's "Le Freak".

The Lum Stormtroopers Lose It

When a girl rejects you, watching a Star Wars marathon while on acid might not be the best option.

The Lum Stormtroopers Lose It

When a girl rejects you, watching a Star Wars marathon while on acid might not be the best option.