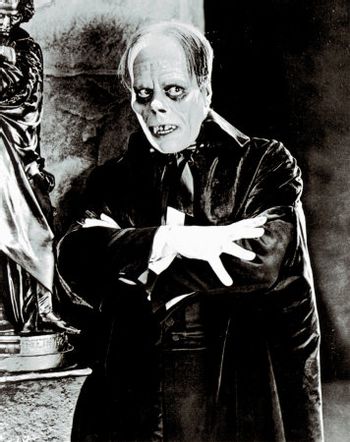 Well, I saw Lon Chaney walking with the Queen...
"A clown is funny in the circus ring. But what would be the normal reaction to opening a door at midnight, and finding the same clown standing there in the moonlight?"
— Lon Chaney
Advertisement:

The original Man of a Thousand Faces, and one of the biggest stars of The Silent Age of Hollywood, Leonidas Frank "Lon" Chaney (April 1, 1883 – August 26, 1930) had a brief but incredibly varied career.

Born in Colorado Springs on April Fools' Day to two deaf parents, Chaney quickly developed an aptitude for pantomime. (One early Hollywood acquaintance summed up his expressive features simply: "He had a deaf face.") First appearing onstage in 1902, he soon carved out a career in vaudeville, becoming known as a singer and dancer. Chaney married actress Cleva Creighton in 1905; their only son, Creighton Chaney, would eventually forge a notable acting career of his own under the name of Lon Chaney Jr. The Chaneys divorced around 1913, after which Lon Sr. moved from the theater into film. Several years later, he would meet and marry Hazel Hastings, and they remained married for the rest of Chaney's life.

Though he worked steadily in film, acting and occasionally directing, his first real breakout role is widely considered to be "The Frog" in 1919's The Miracle Man. The next year, he proved his devotion to the craft with The Penalty, strapping his legs back behind him to play a double amputee crime lord. The restraints were so painful that he was unable to maintain the position for more than twenty minutes at a time. 1923 offered perhaps his second most famous role, that of Quasimodo in The Hunchback of Notre Dame. He Who Gets Slapped and The Unholy Three are considered some of his best work, but his best known part (and make-up) is undoubtedly The Phantom of the Opera (1925).

One of his personal favorite performances was Tell It to the Marines. His tough but sympathetic Sgt. O'Hara was a hit with the real-life Corps, and he was the first member of the motion picture industry to be made an honorary member.

Chaney was an acknowledged master of film make-up

, crafting memorable characters from little more than wire, putty and hair. He wrote the Encyclopaedia Britannica's article on make-up for an edition in the 1920s, and the leather case in which he carried his materials in is frequently displayed at the Los Angeles County Museum. A joke at the time involved pointing out a spider/bug/whatever on the floor and quipping "Don't step on that—it might be Lon Chaney."

Though he gained attention onstage as a song and dance man, the only film of his dancing is in the incomplete The Fascination of the Fleurde Lis. There are no known recordings of his singing, though friends and co-stars maintained he had an impressive baritone.

Chaney often went out of his way to help actors in the beginning of their career, and gave advice and early supporting roles to Noble Johnson and Boris Karloff. There is a story related by Loretta Young who recalled having a terrible time on the set of Laugh, Clown, Laugh when she was only fourteen. The director, who was generous about letting her know how much he disliked her, was always much more pleasant when Chaney, the biggest star in the picture, was nearby. Noticing this, Chaney made it a point to be on set constantly, advising her between takes or entertaining the other actors.

He was diagnosed with lung cancer in 1929 and died the following year, just a few weeks after turning 47. His final picture was a remake of his own early movie The Unholy Three. It was also his only sound film, with Chaney providing five different voices. He is interred in Forest Lawn Memorial Park Cemetery in Glendale, California, among many other entertainment legends such as Clark Gable and Michael Jackson. His father and second wife are interred nearby, but Chaney's crypt is unmarked.

Man of a Thousand Faces (1957) is a rather fictionalized Biopic starring James Cagney as Chaney.