Film / The Ace of Hearts 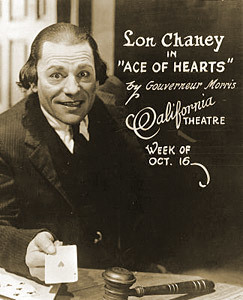 The Ace of Hearts is a 1921 film directed by Wallace Worsley, starring Lon Chaney.

A terrorist organization, referred to as "a certain brotherhood", carries out assassinations from time to time. When it's time to kill "the man who has lived too long", as the group refers to its targets, they draw cards to decide who will carry out the deed. Whoever picks the Ace of Hearts has to carry out the murder.

The group does not consist of scraggly bearded radicals, but rather respectable-looking men in suits. Among their number are Farallone (Chaney) and Forrest, the youngest man in the group. The brotherhood contains exactly one woman, the young and good-looking but dedicated to the cause Lilith. Farallone and Forrest are both in love with Lilith, but she is too focused on the brotherhood's work. However, when Forrest draws the Ace of Hearts and is tasked with killing the brotherhood's latest target, Lilith offers to marry him in order to help steel his nerve for the assassination. This leads to a crisis of conscience for the newlyweds, and Farallone as well.