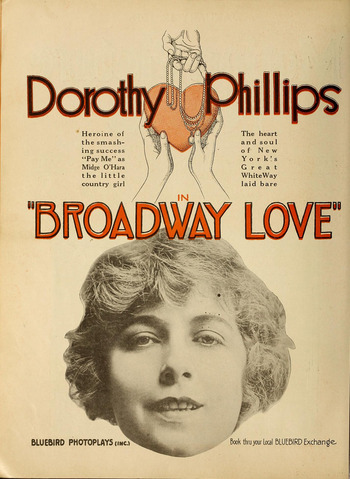 Broadway Love is a 1918 film directed by Ida May Park.

Midge is a young woman from the sticks, working as a chorus girl in a Broadway act. She is invited to a party by Cherry Blow—yes, that's right, the character's name is Cherry Blow—the senior ballerina in the theater troupe. Just as she's leaving, her possessive, creepy would-be boyfriend Elmer shows up. Midge, who plainly is not interested in Elmer, blows him off and goes to the party.

The party makes apparent that the Broadway chorus business appears to be a front for matching up sexy young women with wealthy sugar daddies. Cherry has already bled dry and dumped one Jack Chalvey, who, in the depths of his despair, is putting a gun to his head at the party when Midge sees him and talks him out of it. Meanwhile, Cherry has matched up Midge with wealthy man-about-town Henry Rockwell. Midge is appalled when she finally figures out what's going on and demands to be taken home. Henry offers her a ride, but when he tries to rape her in the back seat of the car, Midge jumps out while the car is moving, and is seriously injured.

Elmer is played by Lon Chaney, who would soon become a huge star by playing more creeps and weirdos.