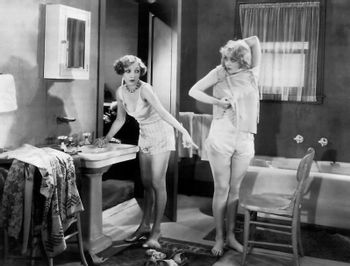 The Broadway Melody is a 1929 film directed by Harry Beaumont, starring Bessie Love and Anita Page. Love and Page are the exotically named Hank and Queenie Mahoney, who have taken their singing-and-dancing sister act from the West Coast to Broadway in hopes of making it big. They have a pretty good advantage in that Hank's boyfriend, Eddie Kearns, is a well-known Broadway performer. Eddie gets the Mahoney Sisters a place in Broadway producer Francis Zanfield's new show, but Hank gets cut from the show while taller, sexier Queenie attracts a lot of male attention and gets a bigger part. One of the men courting Queenie is playboy Jock Warriner, whose intentions are less than honorable. A bigger problem is another one of Queenie's suitors—Eddie, whose attentions shift from Hank to her sister.

Remade in 1940 as Two Girls on Broadway.

Tropes in The Broadway Melody include: