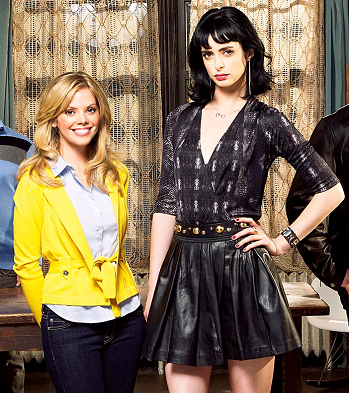 "I shall be dark and French and fashionable and difficult. And you shall be sweet and open and English and fair. What a pair we shall be! What man can resist us?"
— Anne Boleyn about herself and her sister Mary, The Other Boleyn Girl
Advertisement:

This is a character contrast trope. Both female characters are decidedly feminine but in different ways. The light is generally angelic and feels love, whereas the dark is generally devilish and plays with desire. The light is usually sweet and naïve, whereas the dark is usually aloof and brooding. Either type applies to a Tomboy and Girly Girl contrast. May overlap with Hair-Contrast Duo when their hair color is used to denote their light-and-dark femininity. When a love interest is involved, it's likely to lead to a Betty and Veronica love triangle: Betty being the Light Feminine, and Veronica being the Dark Feminine.

The dark feminine character is not always a villain or a whore, or even necessarily half of a "good girl, bad girl" or "naughty and nice" pair. It could be that she's just the more serious, sophisticated, or mature half of the pair. In some cases, she's even as sweet and innocent as her Light counterpart but finds herself drawn to the shadows. Remember, Dark Is Not Evil. Likewise, Light Is Not Good and the Light Feminine need not be either The Ingenue or The Pollyanna but may be distinguished by her nobleness, proactiveness, or determination.

The Spear Counterpart is Noble Male, Roguish Male — two guys who are both masculine but in different ways.

Not to be confused with Pale Females, Dark Males. This is about personality, not fur/skin color.

The daughters of Snow White and the Evil Queen are every bit as opposite as you can get.

The daughters of Snow White and the Evil Queen are every bit as opposite as you can get.