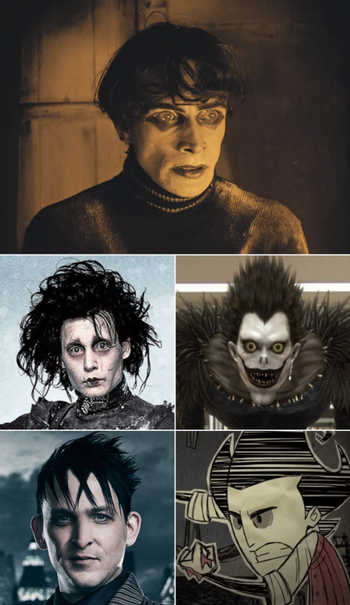 Top: Cesare himself.
Bottom, L - R, top to bottom: Edward Scissorhands, Ryuk, the Penguin, and Wilson Percival Higgsbury.
Characters with unusually pale skin, scraggly black hair, and deeply hollow eyes, often with dark shading under or around them. They wear all black and will be either The Woobie or Ax-Crazy. Typically, they'll also be quite skinny, making for an at least vaguely unhealthy appearance overall. These used to be done specifically as a homage/Expy to Conrad Veidt's original Cesare of The Cabinet of Dr. Caligari, but because of Parody Displacement, everyone just thinks of Tim Burton movies.
Advertisement:

A Sub-Trope of Eerie Pale-Skinned Brunette. (Which is to say, if the character's hair isn't dark or mostly dark, they don't count.) Creepy Loner Girl is the Distaff Counterpart in terms of appearance, but not necessarily in personality.

Also see Looks Like Orlok. Not to be confused with that other Cesare.