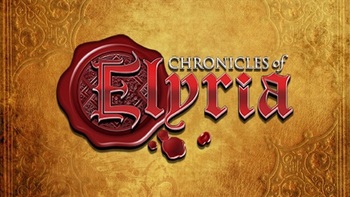 Chronicles of Elyria is a Vapor Ware fantasy Massively Multiplayer Online Roleplaying Game (Marketed as a 'MEOW' or Multiplayer Evolving Online World) developed by Soulbound Studios. Initially announced in late 2014, the development team began a successful Kickstarter that ended on June 3rd, 2016, and can be found here

. Pledges continued through an online store that the developers set up, and Chronicles of Elyria raised more than 7.9 million dollars in total.
Advertisement:

The game was pitched as players playing as souls that reincarnate into new bodies, while preserving a portion of the talent that the previous incarnation possessed. Chronicles of Elyria is notable for deliberately averting most of the tropes of the MMORPG genre, especially Perpetually Static and Death Is a Slap on the Wrist. A player's character was supposed to age over time, eventually dying and forcing the player's soul to reincarnate in another body. This can be hastened by the player's character suffering grievous injuries, forcing its soul to journey through the Astral Plane back to its body, its connection to said body becoming weaker every time a player is forced to "Spirit Walk." Non-player Characters, far from being glorified quest givers, live their own lives and contribute to the economy just like players, the only difference being them being controlled by an AI, and yes, they are just as killable as players. Players can form families by marrying other players or NPCs, and can reincarnate as their offspring. Instead of fixed quests that only change with an update, the Soulborn Engine powering the game will generate tailored quests for each character that can be completed by the player, as well as one-time main quests that permanently advance the story in an aversion of stereotypical MMO stasis.

However, on March 25, 2020, Soulbound Studios announced that the studio had been shuttered, all employees had been terminated and the project was "entering the abyss." A class action lawsuit

was then filed against the studio and its founder, Jeromy "Caspian" Walsh, as the project was considered a scam since they had not provided any actual product for all the money that they had raised. This led to Caspian claiming that the project was not cancelled and that he and the company were still going to be releasing the game and a second, separate game known as Kingdoms of Elyria in the future. An in-depth video going over the situation can be found here

Chronicles of Elyria contains examples of: