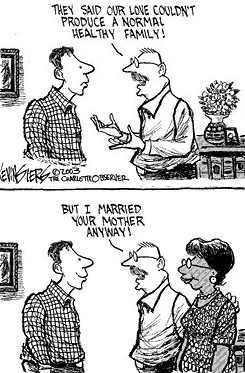 "Who can feel sympathy for Desdemona? A woman who, born and educated to a splendid and lofty station in the community, betrays her race, her sex, her duty and her country, and makes a runaway match with a blackamoor."
— John Quincy Adams, on Desdemona from Othello
Advertisement:

A common source of conflict for a set of married protagonists (or a couple of Star-Crossed Lovers) is for the couple to be of different races among very unaccepting folks. They will be pressured to break up/divorce by family and friends and community, ostracized, exiled or forced to flee, maimed, or murdered, etc.

Their children will be likewise persecuted, perhaps more so than the parents, for complicating racial relations and being inherently 'untrustworthy' due to not being fully one race or the other. Even if the adults are fine, other Kids Are Cruel after all. Expect the child to eventually pop the question about whether there's something inherently and incurably wrong with them because of their genetic heritage.

And of course, sometimes it's a mixed species marriage, or one between a muggle and a mage, complete with attendant prejudice. On the plus side the scifi/fantasy elements mean the kid is likely to be The Chosen One, a Half-Human Hybrid, a Dhampyr, or perhaps even a Hybrid Monster with really cool powers. That makes up for it, right?

Some examples of interracial marriages that earn disapproval can be found in Mighty Whitey and Mellow Yellow, Black Gal on White Guy Drama, and Where da White Women At?. For mixed species marriages, see also Vampire-Werewolf Love Triangle.

In Real Life, mixed-race marriages can be everything from completely accepted to something you only do if you've got a death wish. Thankfully, in many places it's skewed towards the "completely accepted" end of the spectrum, and a great way for someone to reveal themselves as a severe jackass is to show bigotry towards mixed couples. Mixed-race marriages seem to be one of the last bastions of racism. Many opponents of interracial marriage claim to oppose all other forms of racism including genocide, different legal rights, and the physical segregation of races to prevent cultural contamination (and some claim to have friends of other races). However, they generally argue that that it's cruel to have mixed-race kids because they see race as the sole/most important element of collective identity. This makes the existence of people who blur the boundaries between races distressing for people of those races, who will see their identity as being under threat and in their illogical rage target the unfortunate mixed-race children in their midst. Of course, race is just one element of collective identity and while it can be very important to some people this is by no means a given. In general, mixed-race children tend to have about the same level of trouble that their parents have — less if they look like one race or the other instead of an obvious mixture, or live in a society that doesn't care about race.

Related to the above is that, much more than most other manifestations of racism, Whites are almost as likely to be victims as perpetrators. In other words, most Chinese, Indians, Arabs, Blacks, Mestizos etc. might be happy to have Whites as friends or business partners, but intermarriage would be crossing a line. (And let's not even go into how members of different non-White groups may view each other).

In stories that take place in communities where "race" isn't a defining factor in classifying humanity (like ''some'' of the 19th century USA, East Asia, or Russia), a "mixed marriage" could mean many other different things: mixed ethnicity ("ethnicity" here being vaguely synonymous with "nationality"), mixed religion, or mixed class. Due to Values Dissonance, many of these other "mixed" marriages tend to be Dead Horse Tropes in fiction (at least in the Anglosphere), though they do surface occasionally: consider My Big Fat Greek Wedding, which mines humor from the "scandal" of a ('white') Greek-American woman choosing a ('white') Anglo-American man as her husband... a thing no longer scandalous in the late 20th century, but most certainly was just a few decades previously.

Truth in Television, of course, as there are still people who feel this way. Although anti-miscegenation attitudes are not only found in the classic cases of dominant, traditional, "purity"-seeking communities. Notably, some minorities also vocalize disdain for "disloyalty", stemming from the considerable culture-driven asymmetry in cross-race relationships — a subtle but persistent visual reminder of imposed inferiority — and frustrations in changing the narrative over discomforting perceptions of hyper-attractiveness or lack thereof. Then there are some who are simply pricks. But any of these justifications can end up invoking the trope. It is a testament to how far society has come that this trope is on its way to becoming a Dead Horse Trope, at least in much of the world (excluding Fantastic Racism examples, of course). Nevertheless, unfortunately, some mixed marriages are still maligned in real life even now, meaning it's not quite there yet.

To be clear, this trope can cover any romantic relationship, not only matrimony. We just like Alliterative Names here.